My personal gardening calender includes planting various greens by July 15 every summer, resulting in some fast-maturing greens that can be eaten before the fall frosts, like Chicory, Collards, Turnips, Mustard, Arugula, Kale, Chard, over-wintering Broccoli, and Radishes.   Additionally, many will live through the winter to produce very early Spring greens, as the Kale shown here- 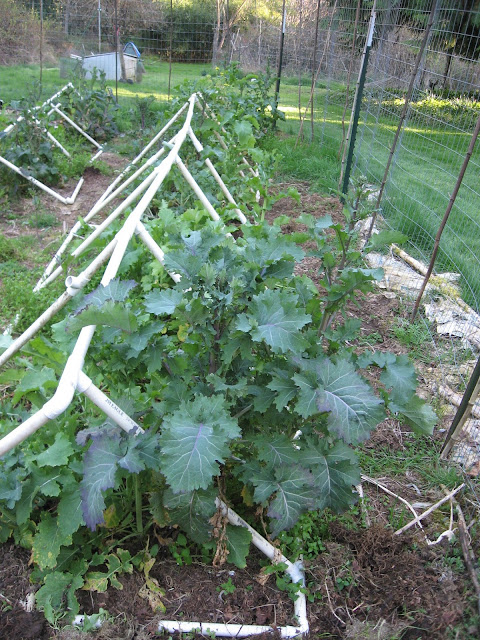 I tried making PVC frames and covering the rows with plastic last fall to see if the protection would improve the abundance and condition of the greens this spring, here removed- 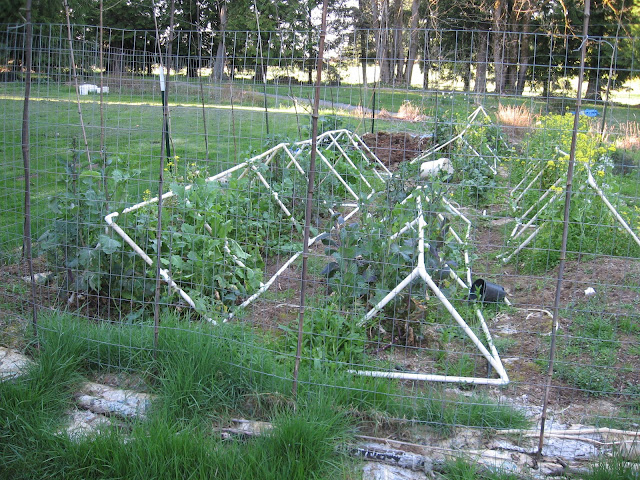 The turnips on the right are over the hill, but the flower buds are just coming on the kale and some of the other greens, so I can go out and pick a large pot of greens and buds every few days.

I was surprised to find a volunteer lettuce plant- 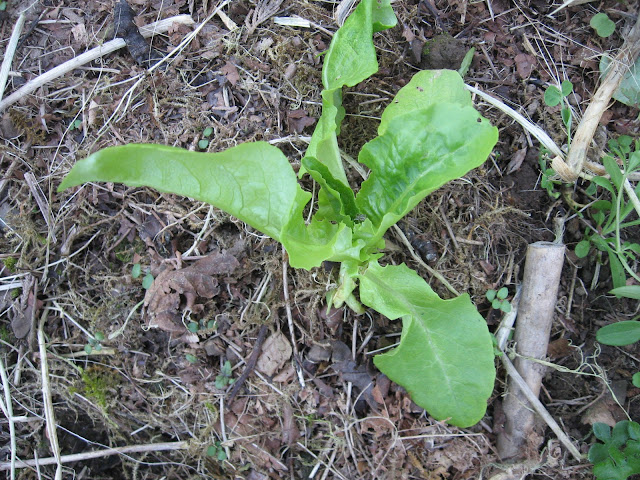 I was also surprised to see some Swiss Chard had made it through the winter, I assume because of the plastic cover. 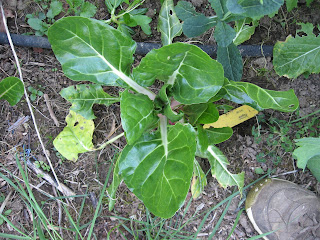 My current calendar started around the beginning of February with growing tomatoes under lights, starting them in ziplock baggies with damp paper towel.    Last week I took the plants that had grown up to the lights, around 11", and started hardening them off on my east-facing concrete porch, that keeps them a little warmer and lets them get used to outside growing conditions. 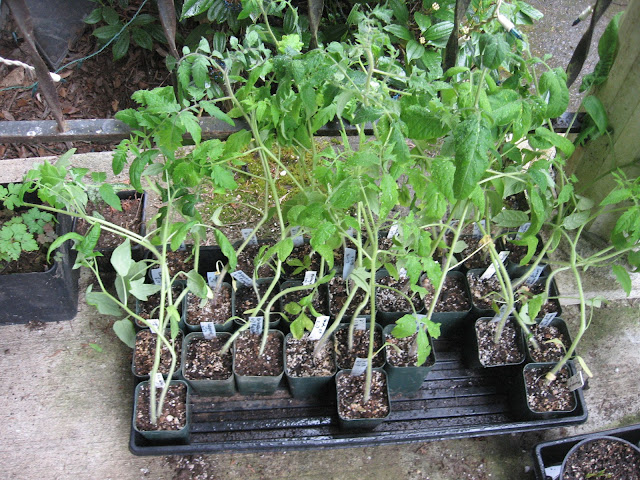 Meanwhile, in preparation for planting, I use my TunLCovers to dry out the soil for the beds where the tomatoes will go, as otherwise I would have to dig muddy soil, something that is bad for soil texture. 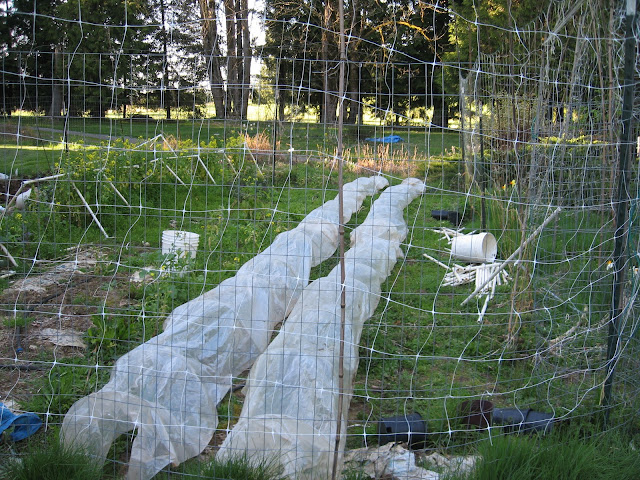 TunLCovers have wire ribs that push into the ground and double walled plastic that has held up well for me for years.  They can increase the soil temperatures by 10 degrees and also keep the tomatoes and later the squash and cucumbers warm.

The cucumbers and squash need warmer conditions and go out around May 15 under tunnels, so are started around April 1, here being sprouted in ziplocks, some have 1" roots after only 3-4 days, and get put into individual pots, like Tanja and Armour cukes, and Cocozelle and Jackpot Zucchinis- 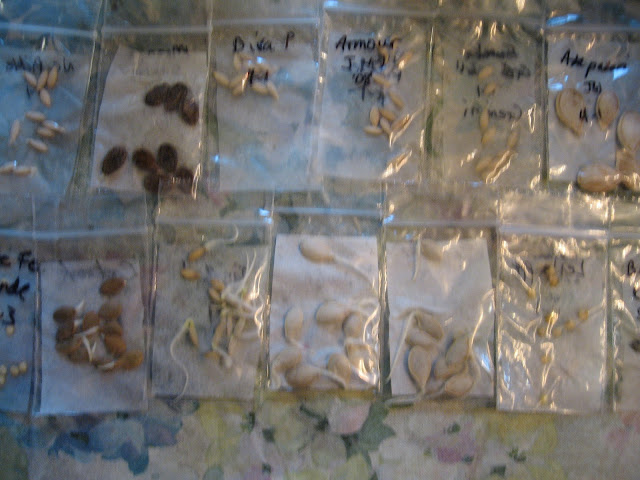 The germination is nearly 100%  on many seeds. but a few older cucumbers proved disappointing this year.

It took me a couple of weeks longer than I had planned to get the tomatoes planted, I should have tried to put down newspaper last fall because the weeds were incredible and I had to use my mattock to clear the ground, 2 days.  Untouched weeds are on the left.   Here are the holes, amendments include lime, glacial rock dust, rabbit manure, compost, and lava rocks in the bottom to discourage moles and voles. 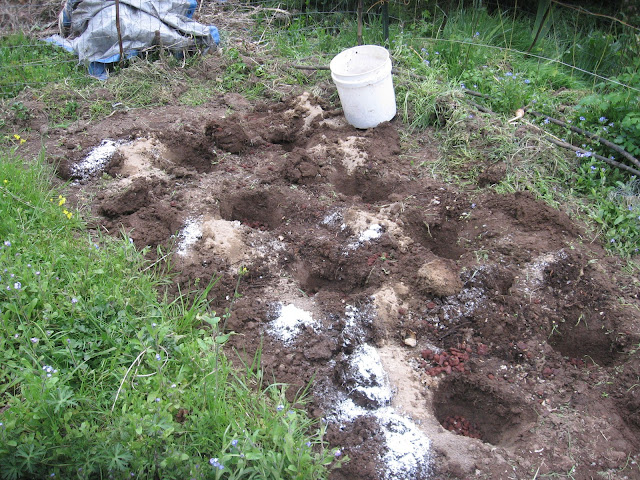 I sink the plants 12-18" up to their first green leaves, so they can root along the stems.  After planting I sprinkle with Sluggo, Iron Phosphate slug bait, and put the tunnels on to warm them up.  Sorry about the blurry photo- 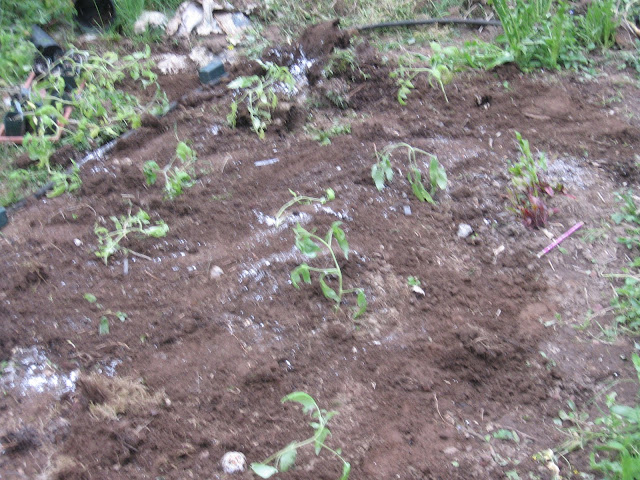 Next I have prepared beds for a couple of types of beans that can take April 15 weather, Pisarcka Zlutoluske, an Heirloom wax bean that has performed for me early before, and Runner beans, Phaseolus coccineus, though this year I am growing several white-flowering, white-seeded varieties as an experiment, I hope the hummingbirds are not too disappointed when the flowers are white instead of red.   Peas and fava beans can also be planted now and earlier.

I plant the regular beans around May 15 to June 15, I will be getting beds ready for them.   One year I tried planting them under tunnels to help them grow earlier, but voles took advantage of the cover to eat all the seeds and I had to replant.

What are you growing now?