Brassicas, formerly known as Cruciferae because of their 4-petalled flowers, are a very useful edible group of plants.  They encompass many edible plants like broccoli, mustard greens, cauliflower, cabbage, kale, collards, turnips, Chinese Bok Choy, and so on.  Many important oil-producing plants are in this family.  They also tend to have a pungent taste, as in the mustard greens and seeds, and cress.  Nasturtium officinale is watercress, an introduced plant, and of course regular flowering Nasturtiums are widely grown, having large seed that is very easy to germinate and edible flowers and leaves.

But there are also other ornamental plants in this group that can also have some edible functions though little-used for that.  An example is Lunaria annua, really a biennial, which is one of those plants ideally suited to growing on the west coast of the US where there is a wet season in fall, winter, and spring and a dry season in summer.  Like many other biennials (dandelions, Forget-Me-Nots, etc), the seeds will sprout with the fall rains and grow all winter, and the plant will bloom in spring, and ripen its seeds before the dry summer weather hits.  Lunaria's name comes from the translucent central disk left in the seed pod when the outer layers are carefully removed, and makes lovely shiny round orbs reflecting light for dried arrangements.  It is also called Money Plant.  But it turns out it also has edible qualities.  The early leaves can be eaten, with a slightly hot taste, and the roots are edible before flowering.  The seeds can be ground with cold water like mustard seeds to make a mustard substitute.  Lunaria can happily self-sow every year and return dependably every spring.  It prefers partly shady spots, and while usually purple, is also found with white blooms.  The leaves are attractively heart-shaped with scalloped edges. 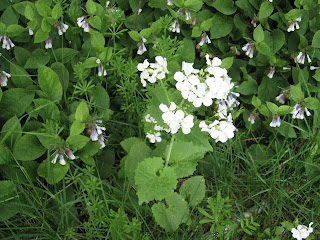 White Lunaria
I am growing another similar plant this year that is a perennial or biennial.  It is called Fibigia clypeata, and has fuzzy silver leaves in a basal rosette, 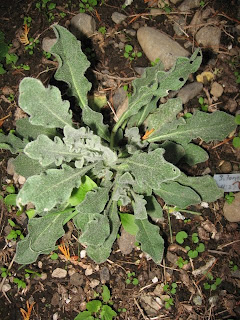 Fibigia rosette
then sends up bloom stalks later that have small yellow flowers, and make oval seed pods that, like Lunaria, lose the outer covers to reveal a silvery translucent inner layer.   Here they had to be tied up from flopping. 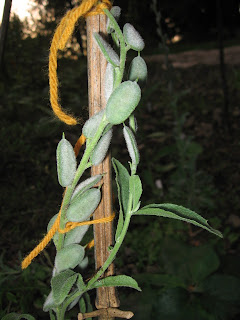 Seed pods
When saving seed from another Brassica, Arugula, I was noticing it also has a translucent inner layer, though it is small enough to not be very decorative; however, I am trying some in a small vase.  Arugula is known as a spicy salad addition to add interest to a green salad, but also makes a tasty pesto with a little bite, sauteed briefly with garlic and ground smooth in a food processor.  It is also good added raw to a pizza, or cooked briefly with pasta with added riccotta or other cheese.

Many of the Brassicas are quite cold-hardy, and can be grown in a zone 8 garden in the winter.  My experience has been that the plant needs to attain sufficient size by frost to withstand the cold temperatures, so I have a deadline of July 15 to get some planted that I want to make it through the winter.  Some good choices are Wild Red Kale, collards, over-wintering types of broccoli, and turnips, which can overwinter and make early spring greens. I like to cut the leaves in early spring as well as the flower buds which are similar to broccoli heads but smaller. 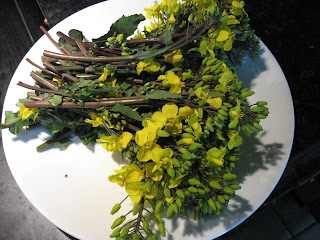 Many of the Brassicas, especially the fast-maturing Chinese greens, bolt quickly in spring but will last longer in fall, and grow better in the cool fall temperatures.  Bok Choy can make nice big plants at this time of year.  I direct-sowed mustard greens, Arugula, turnips, and several kinds of Chinese greens July 12 and in one month's time they were making nice greens that were ready to pick- shown here at 6 weeks, with runner beans on the left and cucumbers on the right.

I often just remove the outer leaves but when plants are crowded I harvest the whole plant.  The white stems are crisp and sweet.  They can be boiled, or sauteed with onions, mushrooms, and garlic.  And I belong to the Garfield School of Cooking- EVERYTHING is improved by cheese.

There are a few ornamental plants in the Brassica family that are familiar, like the Wallflower, Erysimum.  They have not persisted well for me, but I had one this spring with a delightful fragrance, and I may try them from seed next year.  Iberis or Candytuft is an annual or perennial used frequently as a ground cover or rock garden plant.  The plant is liked by pollinating insects and also has medicinal uses.  Lobularia maritima, Sweet Alyssum, is used frequently as a border plant or edging and has a sweet honey-like scent, and attracts bees and butterflies.   Matthiola, or Stock, is an annual, or sown in the fall, a biennial, noted for its sweet fragrance and pastel colors.  It is used as a bedding plant and has flowers in spikes.

There are also native wildflowers in the Brassica family.  Those found in Washington state are listed here-
http://biology.burke.washington.edu/herbarium/imagecollection.php?Genus=Arabis&Species=sparsiflora
One is Rockcress, Arabis, which comes in a variety of colors and sizes; some are used in rock gardens.  To look at the list, select Families then Brassica on the left.  Cardamine hirsuta is a common weed that shoots seeds into your face when they are ripe.  Some other Cardamines are nice ornamentals and can be eaten as a cress.  It is easy to start identifying Brassicas after looking through the entries.

One introduced Brassica that is a nasty weed is Garlic Mustard, Alliaria petiolata, on many weed lists.

The edible Brassicas that overwinter are also useful as an early spring flower for a pollen and nectar source for pollinators and beneficial insects.  I let them go to seed, even though that ties up some of my beds past the earlier planting times.  The more such plants one grows in the garden, the more beneficial insects are present to act as predators and pollinators and keep the insect population in the garden in balance.  My farmer neighbor had no apples one year but my two favorite trees (Liberty and Freedom) were loaded, even though it was raining for most of the apple blossom season.

Hannah
Posted by Hannah at 9:12 PM