Tragedy Strikes in the Squash Patch

Well, what can I say.  Mature squash plants are lying there turning yellow and shriveling up, their stems bitten through at the ground.  Win a few, lose a few.  Sob. 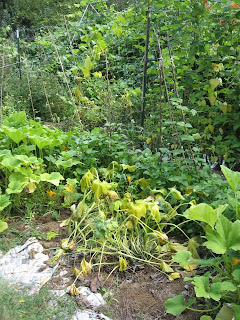 There can't have been much nutrition in the few inches of stalk eaten, it must have been more like, "I don't like this thing growing here in my space!"  At least I have the satisfaction of seeing a few vole carcasses or even just the heads lying around left by the cats.  I'm not a cat lover but appreciate them when I see their efforts.  My special revenge is to put the corpses in the tops of vole or mole holes to make it particularly unappetizing for them to use that run again.

The cats do seem to be leaving the garter snakes alone now, so I can see some in parts of the yard that seem to live there now.  I call them fruit flavors depending on the colors of the stripes on their backs, like "Strawberry Kiwi", "Raspberry", or "Lemon".  Snakes and other helpful wildlife can be encouraged and protected from cats by creating some shelters around the yard, like strategically placed piles of branches or brush, tarps laid out on the ground, or deep ground covers.  I even was surprised to see a lizard again after several years of not seeing any, a Gerrhonotus or Alligator lizard.

Here's what the squash, mostly Crookneck, which are divine eating, very nutty taste and excellent texture when picked young, look like when growing happily.  I have had very good success with the variety sold by Lily Miller. 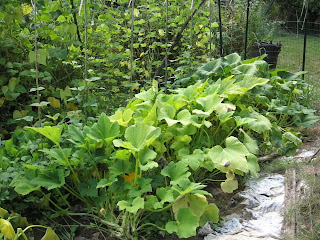 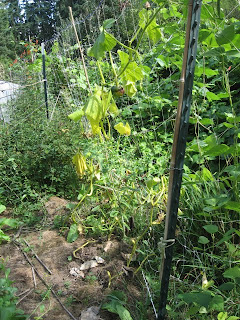 At least my endeavors to protect my pole beans are working in part, see my other post on voles-
http://weedingonthewildside.blogspot.com/2010_08_01_archive.html
Here is a happy combination of Insuk's Wang Kong (IWK) Runner beans and Grandma Robert's Purple Pole beans (GRPP), which are the fastest pole beans to produce that I grow, they were selected for late planting. 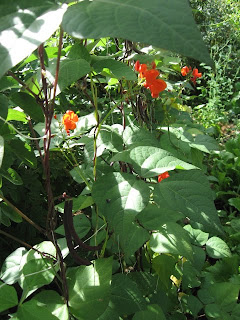 The hummingbirds really like the red flowers, and runner beans are more adapted to cool summers so will start producing earlier and keep on going later than regular pole beans.  I'm experimenting in another bed with interplanting GRPP with Gopher Purge, Euphorbia lathyrus.  I didn't wrap the stems with foil but none have as yet been bitten off.    However this bed did not grow beans last year, though it did have cucumbers in that space. 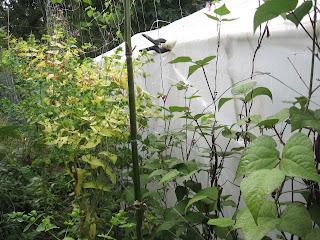 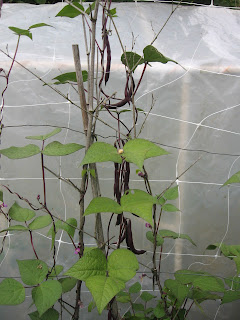 More vole damage, they hollowed out a Lemon cucumber but strangely left a green cucumber right next to it alone. 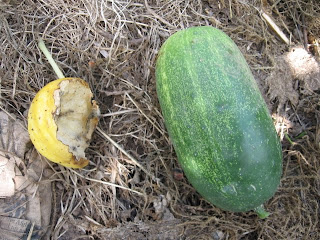 They also don't seem to bother mustard greens at all.  Greens must be planted before July 15 here to get big enough to live through the winter, but will get big enough to eat now in only a month from sowing, like the ones shown here.  Beans I thought were bush beans turned out to be pole beans and required some bamboo poles to climb on, but even in the tangle of greens many of the pole beans have been nipped off by the voles and are wilting. 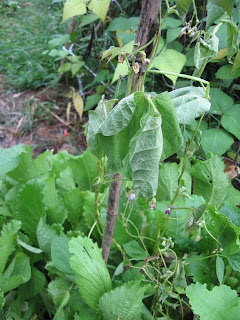 Here are the mustard greens planted out around July 12 and now large enough to pick,

Runner beans are on the left, greens with some pole beans in the middle, and a really nice cucumber, NC (North Carolina) Pickle, on the right, which made a lot of vines and has really been pumping them out.  I like to get the cucumbers up off the ground on a cattle panel or in this case some supplemental bamboo poles as well. 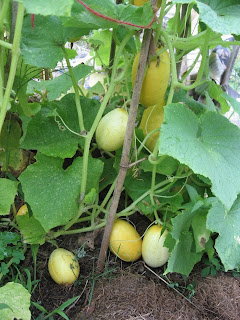 There is also damage in the tomatoes.  In this case I think it is mostly from the moles who love it when I dig a planting hole and put manure in it; the soil is so lovely and loose, and worms must like the manure, so they tunnel up under many or most of my tomatoes.  Not many of the plants actually seem to suffer, but some whose roots are damaged or exposed to too much air underground do- 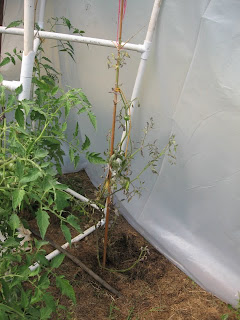 Poor shriveled Gogosha, the sadder because it was my best yielder last year.  When I go down the row and water with a strong hose pressure, the water makes a rushing sound down the holes like it is going over a waterfall into China! 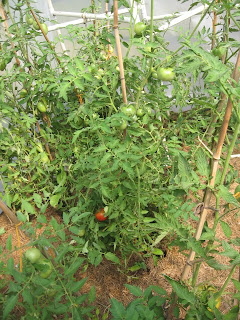 Legend, from seed by Ed Hume, is doing well and even getting ripe.  It is supposed to be resistant to late blight, and has a nice blemish-free round tomato with a sprightly flavor.
Well, the battle continues.  I am planning to try some sneaky home remedies on the voles soon, I don't know if I will be able to tell if they work.  We got record rainfall today, the most rain in one hour EVER (I assume in recorded weather data keeping).   It didn't seem so much to me, I grew up in Houston.  If it rained a lot there, people rowed boats around on the streets and the crawdads in the 10' roadside drainage ditches were happy.  My recurring childhood nightmare was to get up to sharpen my pencil in my flooded schoolroom and step inadvertently into the open mouth of an alligator, brought on by my brother keeping a snapping turtle in his room.;-)   I am so happy to have my nice toasty tomato house up to keep them high and dry.;-)  See-
http://weedingonthewildside.blogspot.com/2010/09/good-and-evil-in-vegetable-garden.html
I eliminated the sagging this year by putting welded wire and chicken wire in the roof to support the plastic.  And with so many green tomatoes, the baskets full of tomatoes I normally get may soon be here, and the smell of tomato sauce simmering on the stove or in the crock pot.
Hannah
Posted by Hannah at 4:50 AM