I started out 5 years ago attempting to germinate and grow many native and ornamental plants.  The first year or so I had some successes and many failures, either to germinate or to then get to grow on in the garden.   So this, my fifth year, I research germination carefully and have been having more successes at least to start out.   I've nearly finished transplanting my latest crop of seedlings.  Some of these are from packets of California hardy annuals that I will be sowing mostly in the Fall, but I thickly sowed some now to see if they would also succeed in the Spring, here transplanted to individual pots- 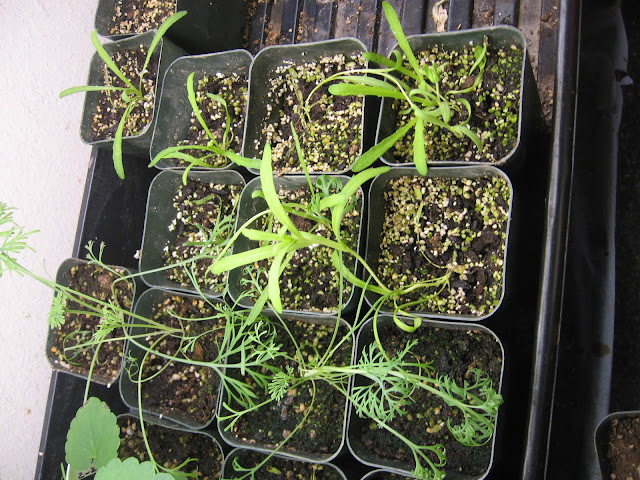 I also thickly sowed some Aquilegia 'Crystal Star' seeds, after having very poor germination of A. vulgaris 'Woodside variegata', only to have every seed sprout.    Sorry about the blurry photo, but it gives an idea how closely they were packed, and had to be teased apart. 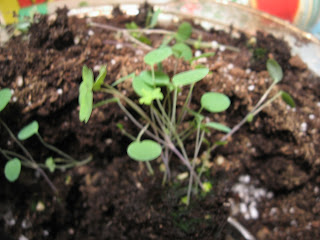 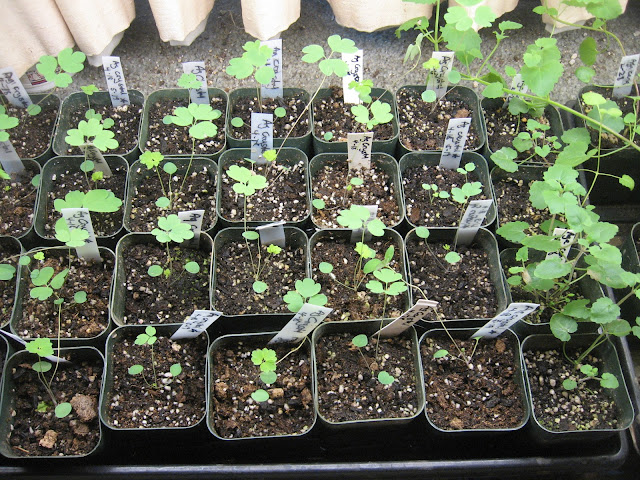 Browallia also sprouted way past my expectations.  The crowded seedlings were a little tricky to separate, but did very well, 20 seedlings from one 2 1/4" pot. 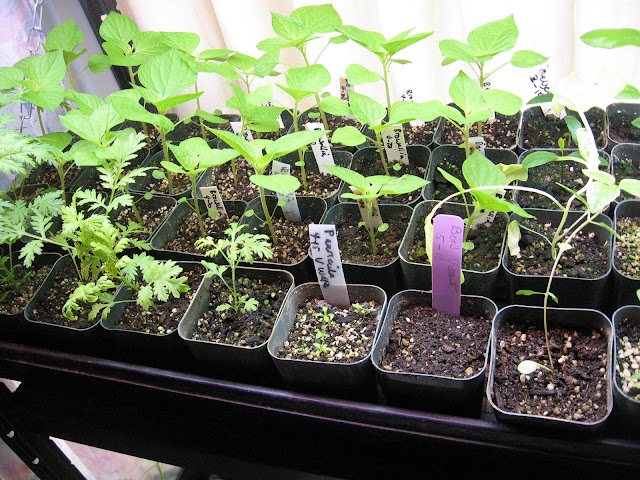 And now, almost up to the lights- 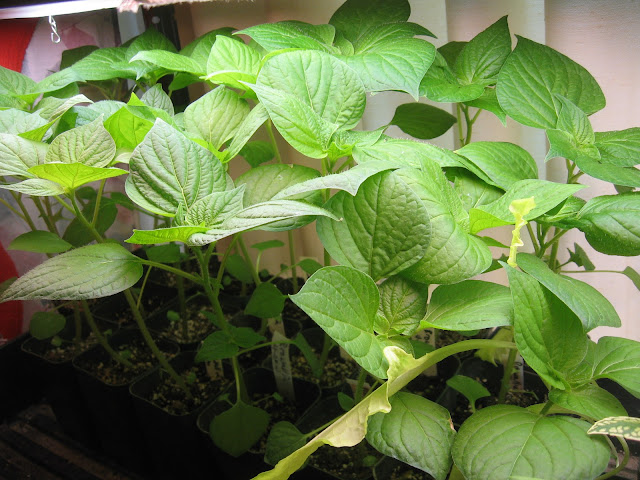 One great surprise was to have 2 out of 5 Passiflora incarnate seeds sprout, after having them at 40*F in the refrigerator for 2 months, then 2 months under lights, at which point I had given up on them and neglected to water them much.  I hope they will be big enough to plant outside in the fall, which can be a good time to transplant, but can also end in failure of the plant to make it through the winter.  Everything is an experiment, unless I can find good growing information on the internet. 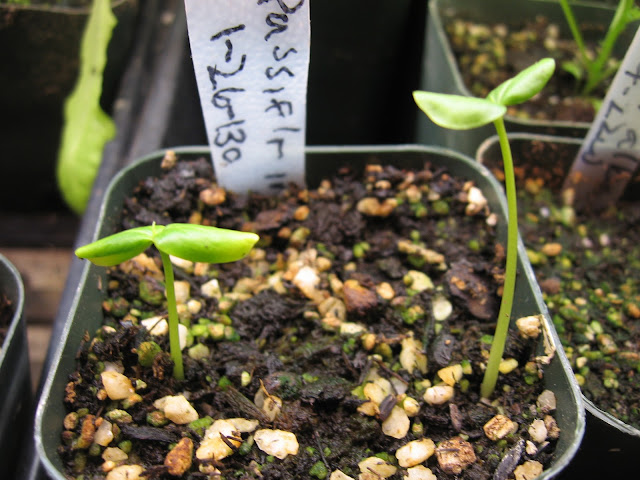 Here they are now, with some Meyer Lemons I grew from fruit from the store.  The trick with citrus is to plant the seeds straight out of the fruit without letting them dry out. 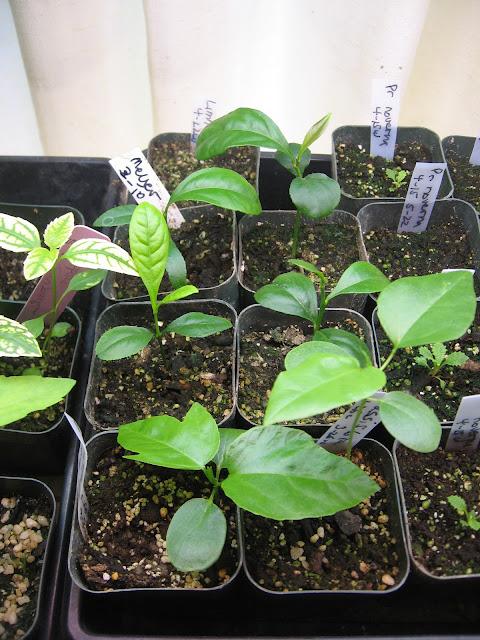 Some other challenging seeds are Primulas.   I managed to grow P. veris and P. Victoriana Silver Lace Black last year by refrigerating them for a month planted in pots, and in sandwich bags, then after taking them out they germinated very well, and I planted them out in the fall and put a tunnel over them for the winter, and was surprised that they survived and went on to bloom. 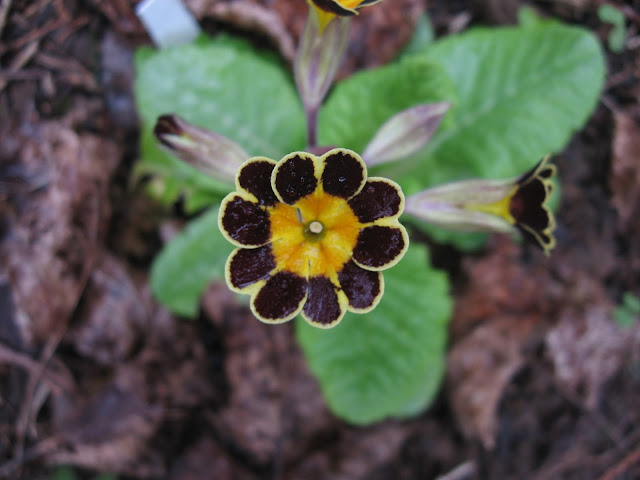 This year I tried P. capitata 'Noverna Deep Blue' from Thompson and Morgan.   I was appalled to open the packet and find the seeds were like specks of dust, mostly stuck down in the creases of the packet edge, so I had to pull the whole thing apart to get them out, and the alleged count of 25 only about 18.  They used to put small seeds in glassine envelopes. :-(  So I put all the seeds I could find in one pot, and was surprised to see them come up in 7 days or so, so small they were barely visible.  They did keep growing.   I usually mist seeds twice a day but tried using a dropper bottle instead because it is easier, and very gentle.   Here they are after getting some true leaves- 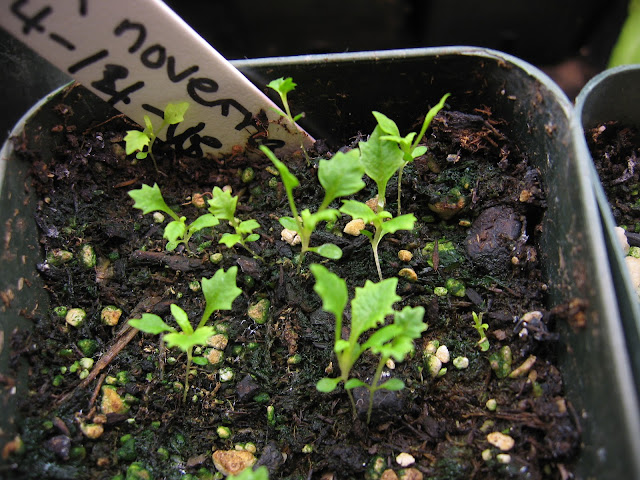 I was very nervous about trying to separate and handle the tiny seedlings, but I only lost perhaps the 2 or 3 tiniest.  They are slowly getting bigger, yay! 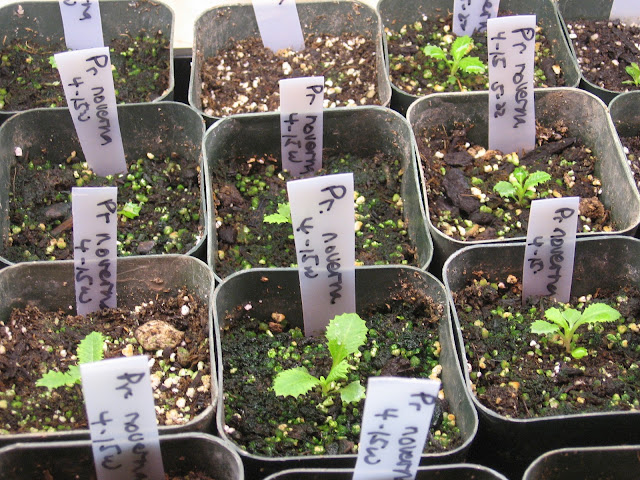 I also tried P. auricula 'Viennese Waltz', the seeds were larger but the germination was poorer, here they are just transplanted last night, surprisingly smaller than 'Noverna'- 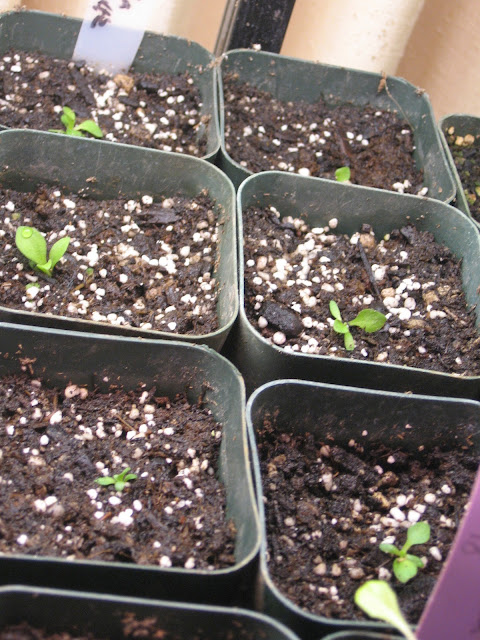 A third, Primula Candelabra hybrids mixed, I am trying needed chilling, and I checked it after 3 weeks and had a sprout, so took them out and a few more have come up, still very small.

Another plant I was very excited to germinate is Heliopsis helianthoides var scabra 'Sunburst variegated', which has very strange chlorotic leaves except for the green veins.  Fabulous!  I hope it will be one that will make it in the garden. 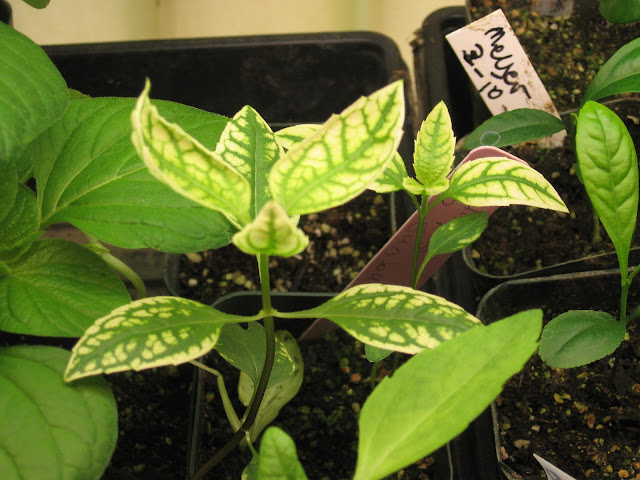 My last experiment was to try some Gibberellic Acid on some seeds that had been difficult before.  I probably messed up on the dilution, perhaps too dilute, but for Eryngium leavenworthii, I had only a couple of seeds germinate my first try, and with the GA3 there were 6, so an improvement, and I soaked Lupines that were pricked with a needle or scraped with a knife if they didn't swell at first, then most did swell, and have had pretty good germination both in a pot and direct seeded in the ground.   One can be seen to have a seedling root starting already- 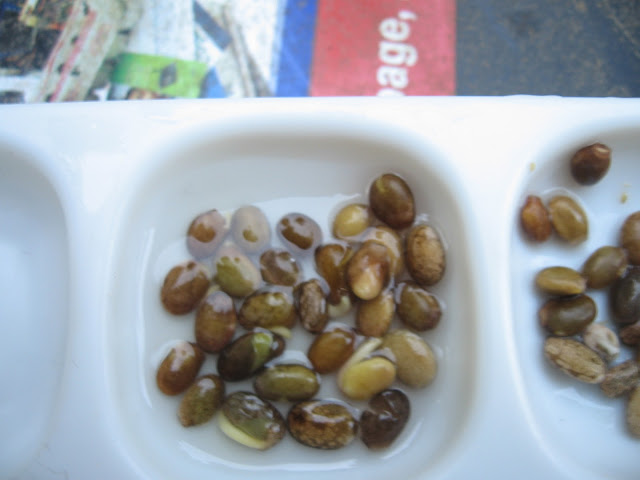 I don't have a comparison with other Lupines I have tried, but have had a hard time with other small hard legume seeds in the past.   Nothing ventured, nothing gained.  If you would like to present some of your sprouting successes, "What's Sprouting Now", write them up and put your link in a comment, then link back to my blog in your post.