I am joining in with other bloggers to participate in Loree of Danger Garden's plant favorite of the week posts.   Click on the link, then see the comment section for other links.

My pick is Aronia melanocarpa, a native fruit and the one with highest ORAC value of any North American fruit, an index of ability to quench reactive oxidation in the body, destructive forces that cause inflammation and disease problems, so a very healthy fruit to grow and eat.   The common name is chokecherry, so it is not the most delicious fruit to eat raw, though my son found that with ice cream or sweetened yogurt it could be palatable.  It is delicious cooked and strained though, and is used in some juice blends, such as Old Orchard Blueberry Pomegranate and Cranberry Blend.  I typically make it into a gelatin dessert, or thickened sauce, or  I freeze the strained cooked fruit in ice trays so I can just pop out a cube when needed.

My 2 Viking Aronia bushes were insanely loaded this year.  I've had to realize I should have been cutting them back  because I think the growth is getting too far out on the branches, they are 7-8' tall, so being loaded this year, they have tended to collapse, though that is limited by the deer fence.   Deer love it, and also birds who are competing with me this year to strip the bushes. 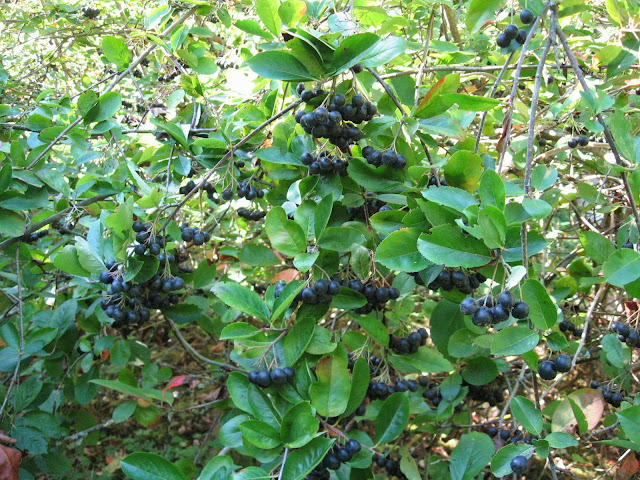 What is so special about Aronia is that unlike Blueberries or currants which ripen a few at a time in clusters, with both green and ripe berries, so while picking the ripe fruits, the green ones can be broken off at the same time, Aronia grow in clusters hanging from a single stem, and ripen all at the same time.   To harvest, I just take a large grocery bag out and snap off the stems, throw them in the bag until it is full, then I can take it inside and sit around at night watching TV or whatever and pull the berries off the stems and directly into ziplock freezer bags, so harvesting is a dream.

There are also dwarf varieties available.   So if you only have room for one fruit tree or bush, my pick for health benefits would be Aronia.  They have nice glossy green leaves and gray-brown bark, white flowers in spring, and nice red fall color.