Succession of bloom: Columbines in the Hobbit Garden

I'm late with this post since it's no longer spring and the Columbines have ceased to bloom.  June turned out to be a series of trips resulting in weeds going to seed in epic proportions.  So I've been trying to remove seedheads and get them out of the yard before I have 7 years of bad weed luck.

Anyway, I like to have a succession of bloom in spring, starting with Hellebores, Pulmonaria, early Narcissus, Muscari, and species tulips, like the very dependable red Tulipa praestans unicum. 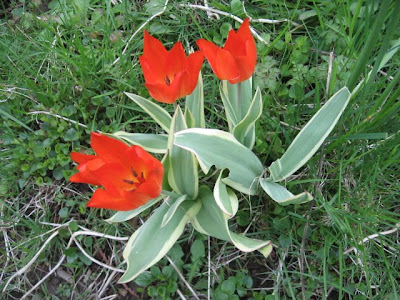 Muscari neglectum is a good naturalizer that makes a clump- 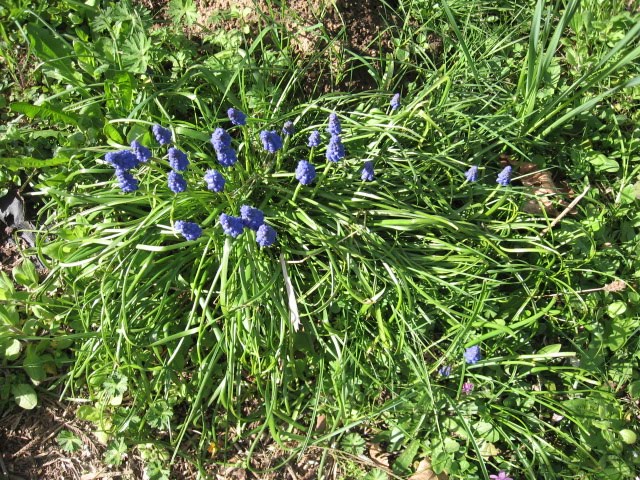 Another early bloomer that makes quite a show is Vinca minor, here the variegated form adds a little sparkle to a shady place. 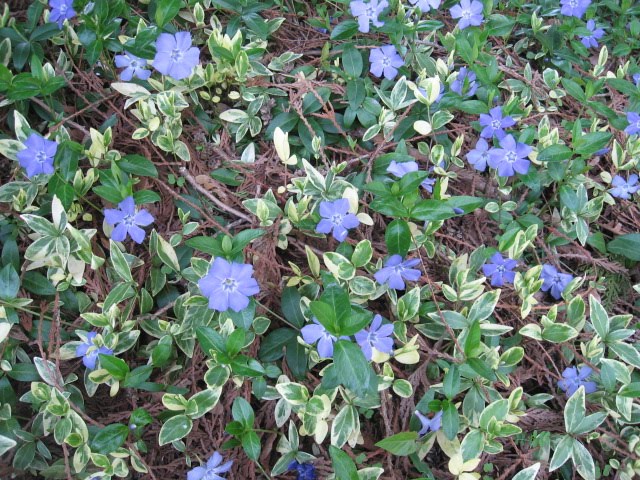 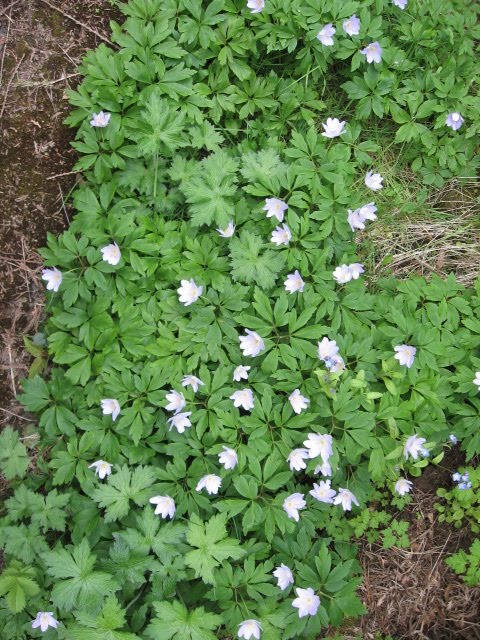 But as charming as all these are in the spring, when the Columbines start to bloom in a area that was supposed to be a rose garden, they achieve an atmosphere of aerie faerie abandon that is worthy of a hobbit garden. 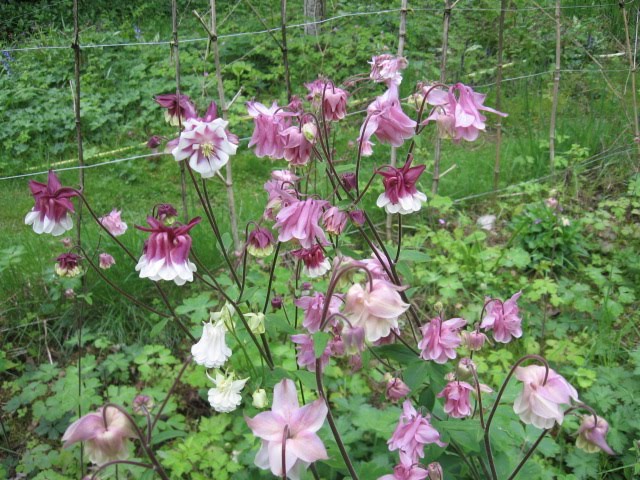 These are all grown from seed.  The double form is delightfully fluted and ruffled, like little pinafores.

This is the single dwarf form, which comes also in several colors.  This is as close to red as they get.  The columbine foliage is also delightful, and persists all year.  The chartreuse mound behind it is a nice Oregano grown from seed. 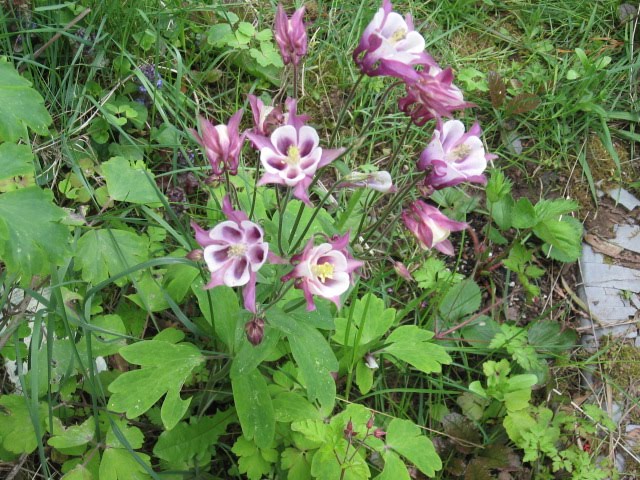 Some of the single blooms are bicolored, as well.  The one drawback is that the tall seed heads must be cut off later.  I save up the seed to sprinkle on unruly areas of the yard to get more Columbines started.

An update on some of my earlier photos- the Lychnis coronaria is now tall and blooming. 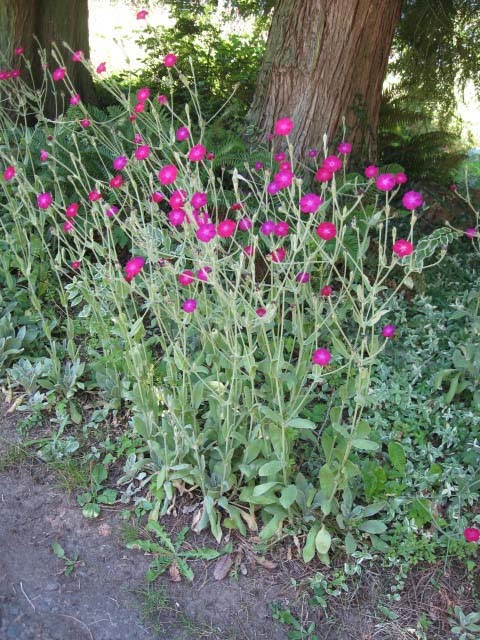 The driveway bed which has a lot of Rubus calycinoides ground cover and was cleared last winter from a large Mugho Pine shrub, is doing well with a mixed group of Rudbeckia from Thompson and Morgan. 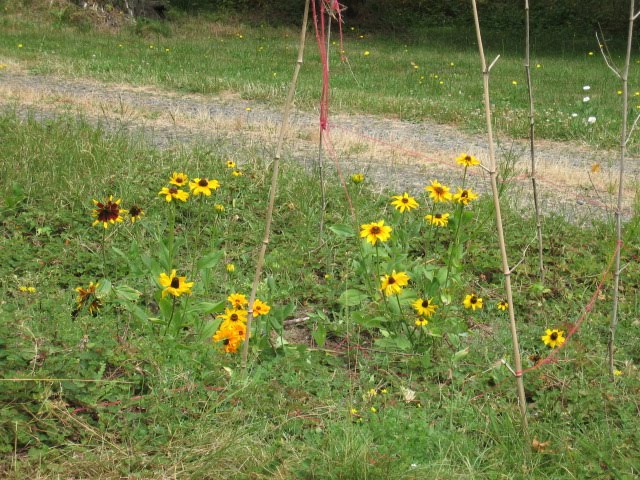 The Coreopsis tinctoria started blooming early and looks nice in a basket but is rather small to have much impact in the bed above.   These seeds came from J.L. Hudson, Seedsman, which has a large variety of seeds but not many that are natives. 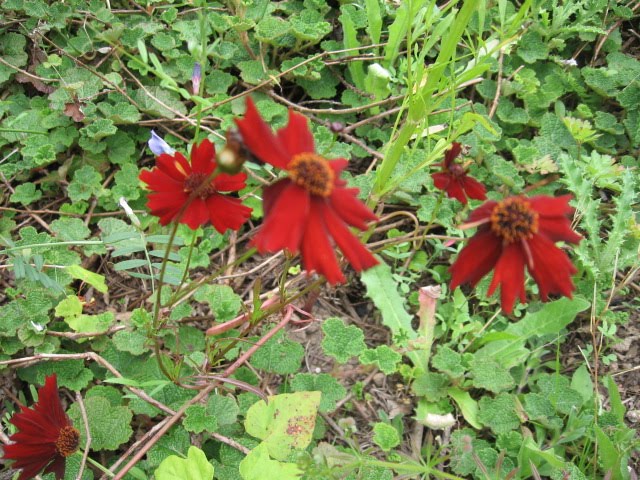 Some Achillea millefolium Colorado, and Anchusa Azurea may eventually bloom. 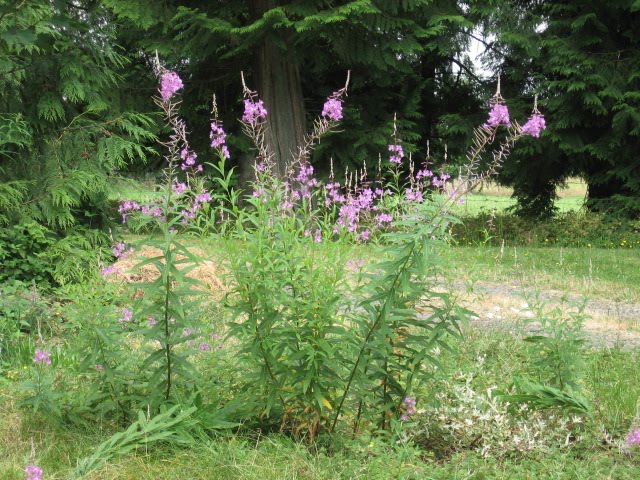 Fireweed, Chamerion (formerly Epilobium) angustfolium, is one of those native wildflowers that can take care of itself.  I was surprised to see a hummingbird sipping from its blossoms as well.  I usually remove the seed heads to restrict reseeding.  Another reliable bloomer that takes care of itself but has not reseeded for me is Stachys betonica, unfortunately not a native. 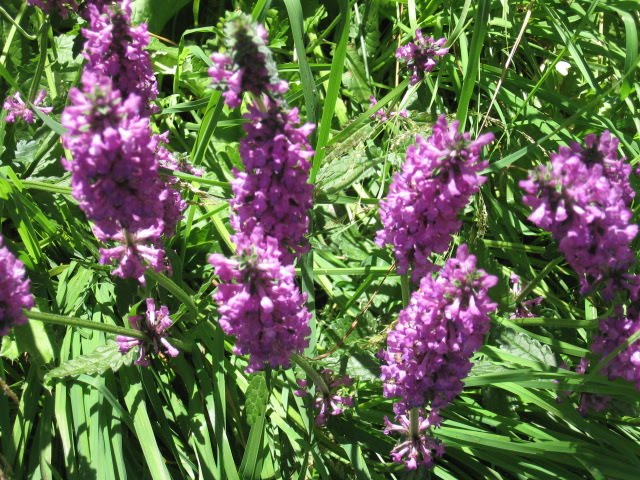 Well, back to weeding.  Here is a bed that was partly planted in June and more plants added this week; it will take a while for them to fill in.  Happy growing! 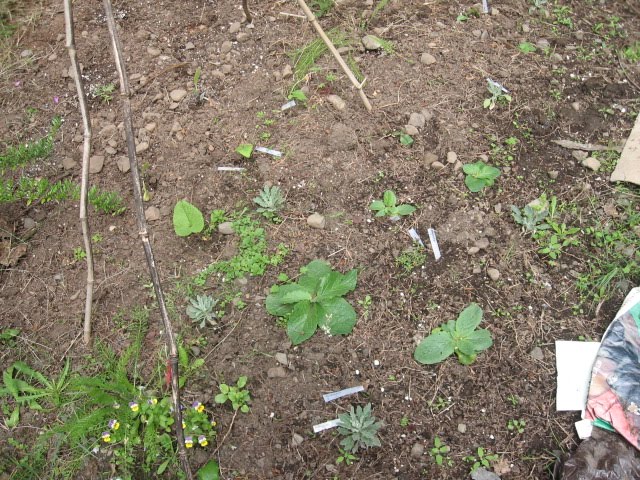