All those green tomatoes enjoying the warmth of my temporary plastic house are finally starting to ripen up.  Here is a photo of the harvest from yesterday- 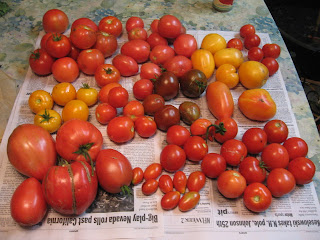 So I'm finally being able to simmer some tomato sauce in my crockpot, third batch this year.  It was a long wait but hopefully since this year's house is more stable than last year's, which blew over 4 times and had to be reassembled, it will keep the rain totally away and prevent late blight so the tomatoes will keep on ripening.

I have to say my favorite for fresh eating is Verna's Orange Oxheart, with few seeds, and meaty succulent flesh that has a mild intriguing fruity taste.  Sochulak has been very prolific lately and is second, with that milder taste that most pinks have.  Marvel Striped has that great fruity taste that most bicolors have, similar to Verna's Orange, but just can't compete in production.  I'm missing one I used to grow, Lucky Cross bicolor, but last year when I grew it, the seed didn't come true- instead of massive cracked yellow gems with that pinkish blush inside, I got some smallish pink pointed tomatoes- I guess it ran out of luck in the cross.  Gogosha was my biggest producer last year since the fruits are so large, but 2 plants were especially damaged by mole tunnels this year, so one is coming along but the other 2 are stunted.

I had 3 years of large trials of 60-100 varieties a year, so this year I reduced my plants to 24 and grew my favorites, generally the most productive ones from last year.  Next year I will probably go back to a few former or perhaps even new varieties, and keep just a few of these.  Well, I am fanatical enough to be weighing my harvest daily, so I can report on yields at the end of the season, but after a bang-up fastastic season like last year, I will have to moderate my enthusiasm.

Hannah
Posted by Hannah at 10:19 PM No comments: