Welcome to What's Blooming Now,  join other blogs from around the world on Carol's blog, May Dream Gardens, for GBBD.  I actually found a couple of flowers blooming outdoors.   I've been waiting years for my 2 Camellia sasanqua varieties to bloom in the winter like they are supposed to.  I'm still waiting on Yuletide, but there were a couple of blooms on Apple Blossom, which I didn't catch until this one was overblown- 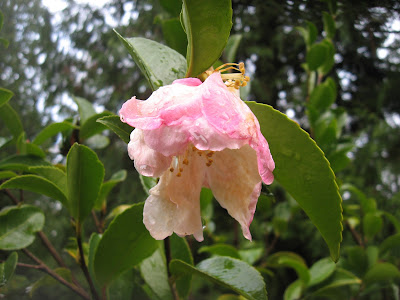 Down in Portland near the river and up in Seattle near the Sound, roses can practically bloom all winter, but here not so much, but a blossom is still lingering on my personal Queen of the Roses, Zephirine Drouhin. 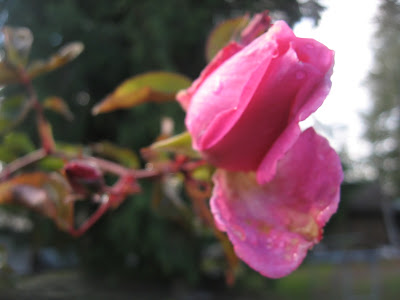 But the flowers that are the cheeriest now are indoors.   My favorite little geranium was divided into 3 little plants that have bloomed nearly continually, here is the current one blooming for the second time under lights at night- 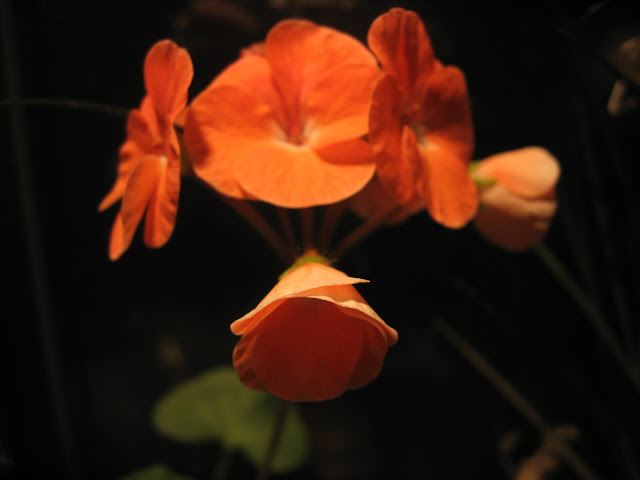 And charmingly in the daytime under natural light, a delight while I'm washing dishes- 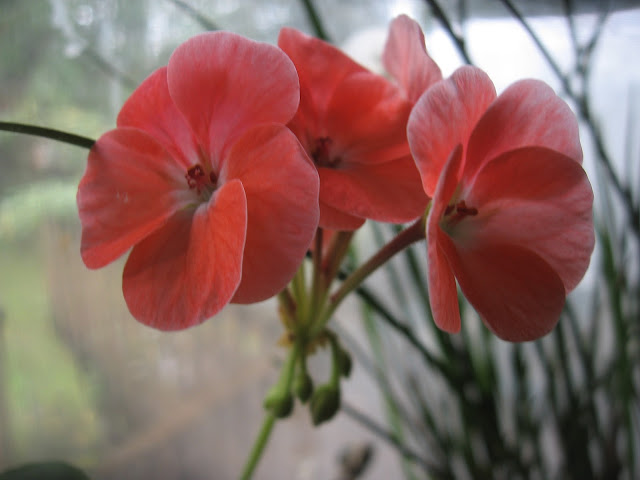 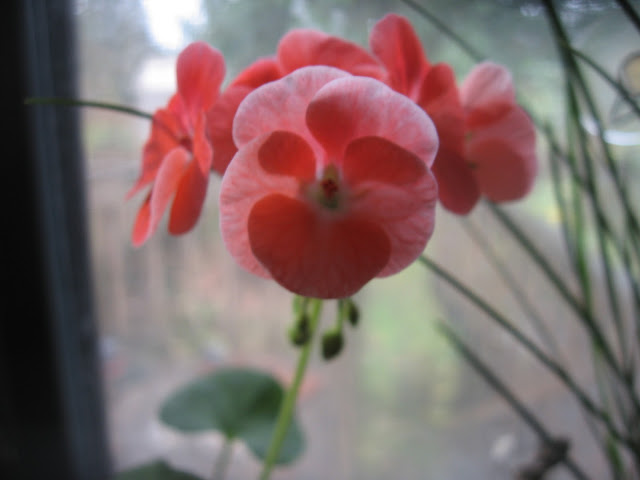 My Christmas cactus was a little early, I like the color of the flowers, a little closer to red than my even earlier one. 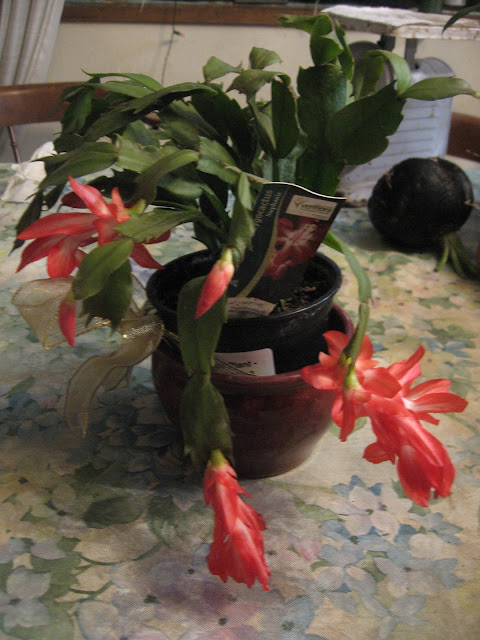 Finally, I was gifted with the ubiquitous flower of the season, but admittedly a nice red- 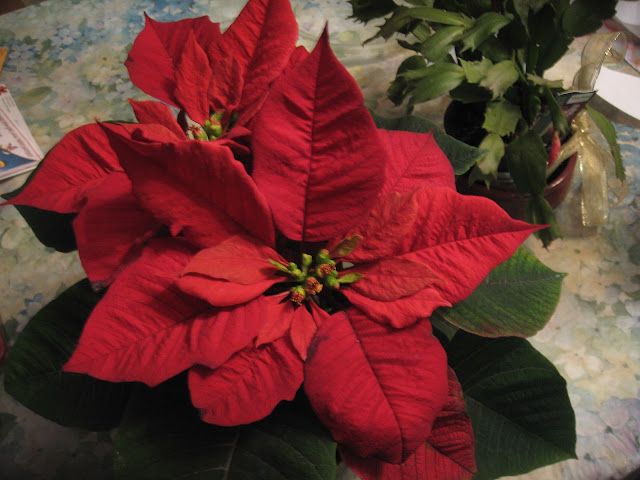 I hope you have some flowers cheering up your winter.  Happy Holidays!

Twisting Together some Turnip Tunnels

I grew long oval Italian turnips last year in a new bed reclaimed from lawn, and last winter I killed the grass to make a new bed 4x as large.  This is the bed, loaded with turnips, and also  Black Spanish Radishes from J.L. Hudson; a few Asian radishes from Kitazawa- Giant Luo Buo, Hyb. Big Time, and Miyashige Green Neck, which have been mostly disappointing; Italian Chicory Galantina, Brussels Sprouts Mezzo Nano, Cabbage San Michelle, Kale Cavalo Nero aka Lacinato, from Seeds from Italy; and saved Wild Red Kale.  Somehow those little seeds, broadcast, amount to a lot more plants and especially turnips than I can imagine when throwing them around, apparently too exuberantly.

My favorites turned out to be the Black Spanish Radishes, I even leave the black skins on, and they cook up firm but not tough, bland yet intriguing, and are supposed to keep rock hard all winter.   Here is one on a scale- 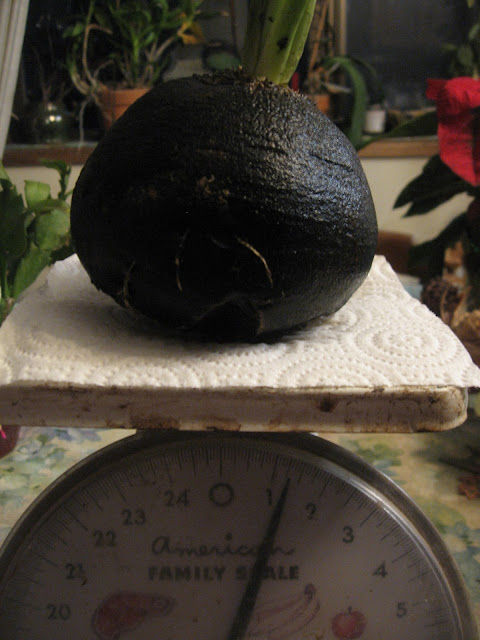 A few did bolt in late summer, I mostly pulled them so I don't know if they will reseed.  Here is one in the ground, the yellow tag is 5" long for reference- 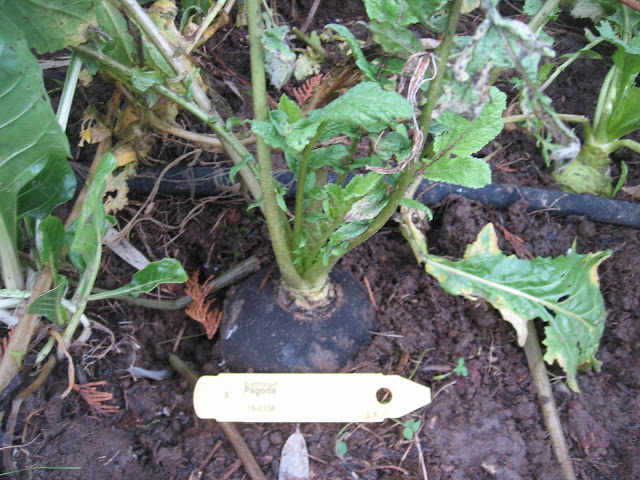 The turnips are very good, and I eat the greens as well, but they can have a few fibrous areas to trim off or chew and spit.  Here is one still in the ground- 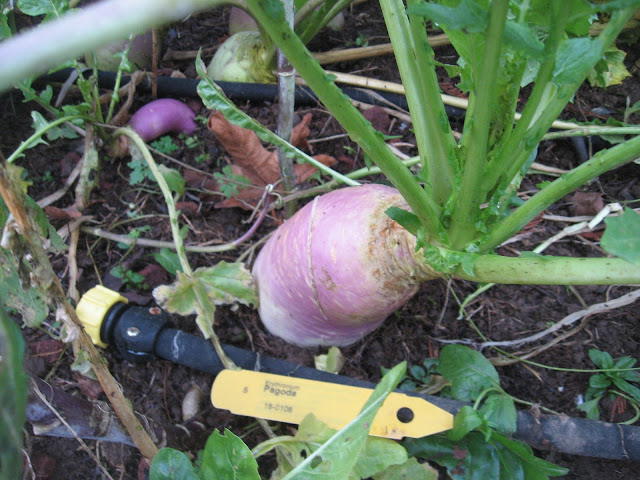 Last year the long turnips were damaged by freezing weather, since the tops sticking out of  the ground turned brown and mushy, though the part underground was sometimes still usable.  So this year I decided to experiment with making tunnels to cover the beds and see if I could protect them from freezing enough to harvest more of them.  I tried putting some mulch on some beds to try to insulate the tops somewhat.  I am also using my extensive collection of PVC 3/4" pipe from previous tomato house endeavors to make tunnels.   I start with a pipe going across the width of the bed, grouping some of similar length, then add elbow joiners, spacers cut from pipe, then a "T" joiner for the vertical pipe.  A length-wise piece, these are grouped in 3's, is attached running down the side of the bed;  on the other side a longer spacer moves the T down so the vertical piece goes into the second of 2 T's at the top, staggering them.  I prefer the verticals to be close in length but here one side is longer because of the pieces of pipe I was working with.  I then add a top length-wise pipe.  Working down the bed, I add T's, vertical pieces, occasional pipes across the bed, and top pieces, then end with the elbows again at the end.  I have added some straight tubular joiners to make longer pipes out of 2 short pieces.   I use heavy plastic sheeting 10' wide from a 100 ft roll from Home Depot.  It has held up well so far for 3 years. 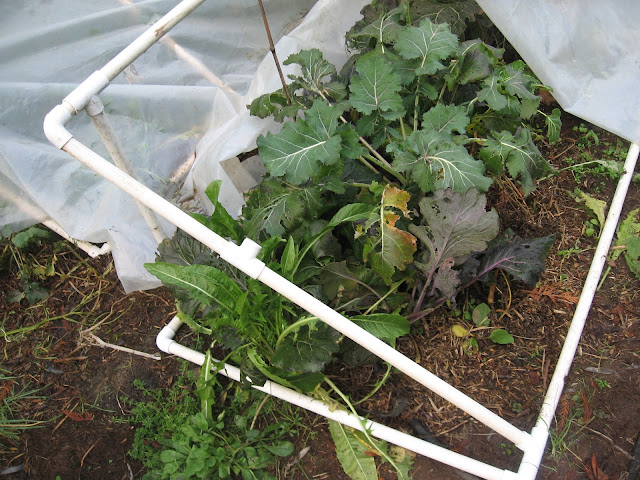 Here are the rows of tunnels I have made so far, I ran out of plastic. 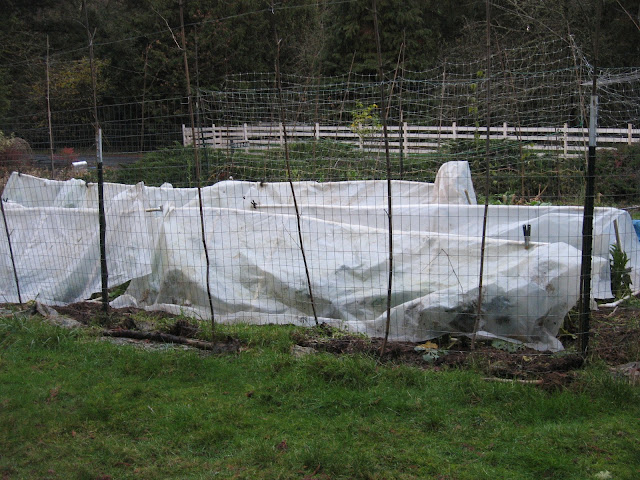 I use spring clamps from Home Depot to hold the plastic on the pipes at the top/ends, they had a nice mesh bag with assorted sizes cheap, though some were too small for PVC pipe.  I also have some from Harbor Freight.   I will give a report later when I see how well the turnips are protected from the lower temperatures, it has gotten down to 6* F here a few times.  Smaller round turnips have in the past had no problem living through until spring, unprotected.

The one disadvantage of just twisting the T's and connectors together with the pipe is that they can stick or else untwist by themselves.  This can be prevented by drilling holes in the T's and pipes and inserting a screw, but that would be a lot of work and perhaps weaken everything, so I haven't resorted to that.

Here is the Chicory, I cooked some as a green, and they were OK as a spinachy type green.  I will use them more as the turnips are used up and I am curious how they last over winter and into spring. 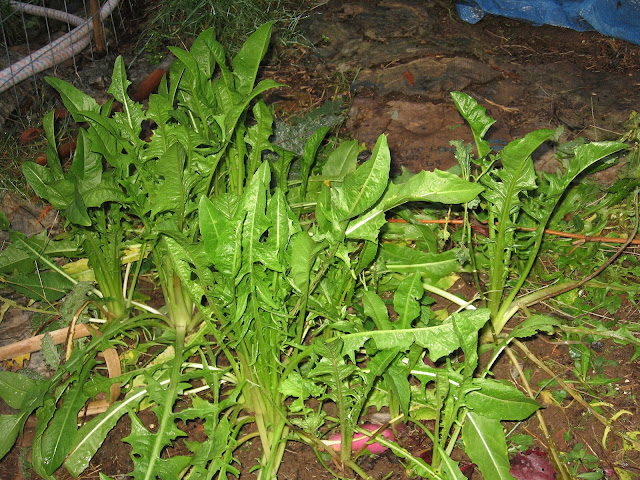 What's still harvestable in your garden?   I can still go out and pull as many turnips and radishes as I care to cook every day, and hope the cabbages and brussels sprouts will make a crop in spring.  I can also usually count on some turnip, kale, and other cole crop greens and flower buds in spring for very early greens.  I'm thankful for winter vegetables and year-round harvest.

Hannah
Posted by Hannah at 1:08 AM No comments: