It's exciting to see what wildflowers I can find in my yard at this point.    Join the other gardeners for Wildflower Wednesday at gracious hostess Gail's Clay and Limestone blog.
The stinging nettle is starting to bloom. 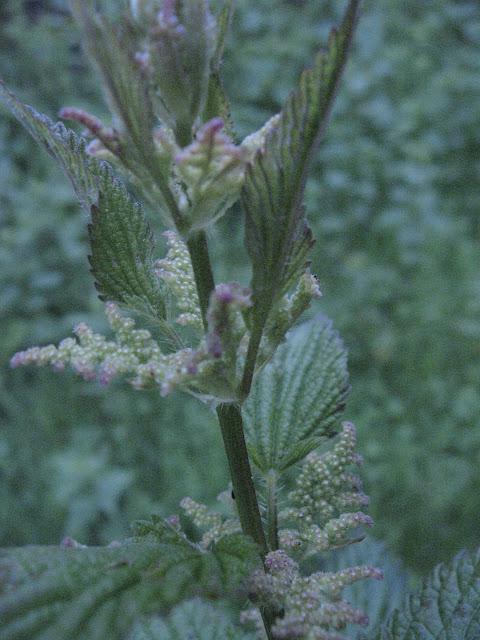 Spring Beauty, Claytonia siberica, is starting to bloom but closed up because of the rain, it is next to some delicate Circaea alpina, a delicate ground cover that has very small white flowers later- 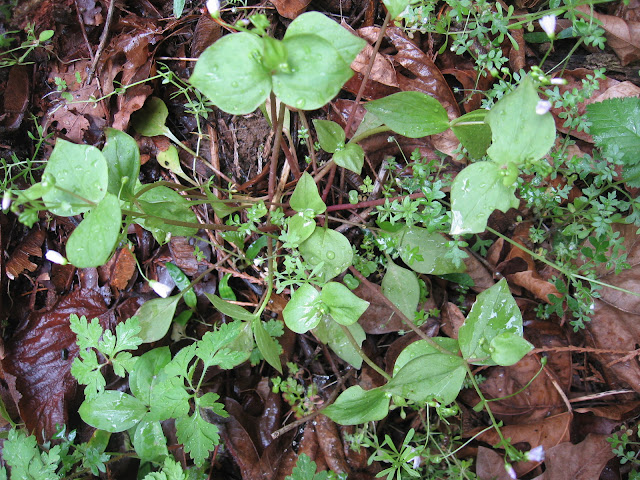 The delicate plant winding through it is Nemophila parviflora, a tiny delicate vining annual with tiny 1 mm. flowers, not yet open- 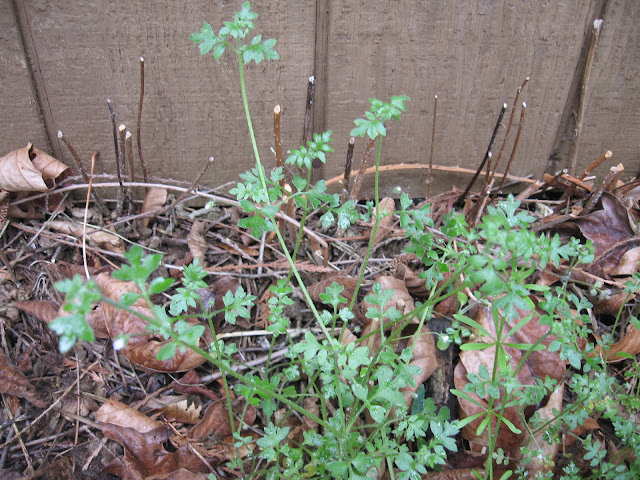 The native with the most impact in my yard at present is the Red-flowering currant, Ribes sanguineum 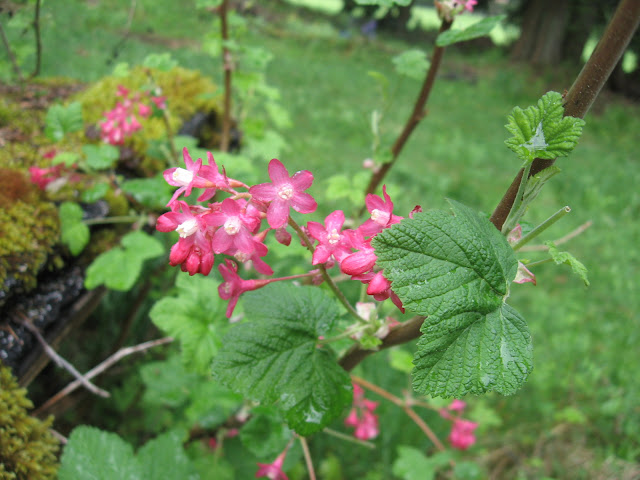 The Trilliums have been blooming and now are aging to a magenta color, they have been smushed under a wire cover since deer decided to start eating my Trilliums this year; don't they make a lovely bouquet!- 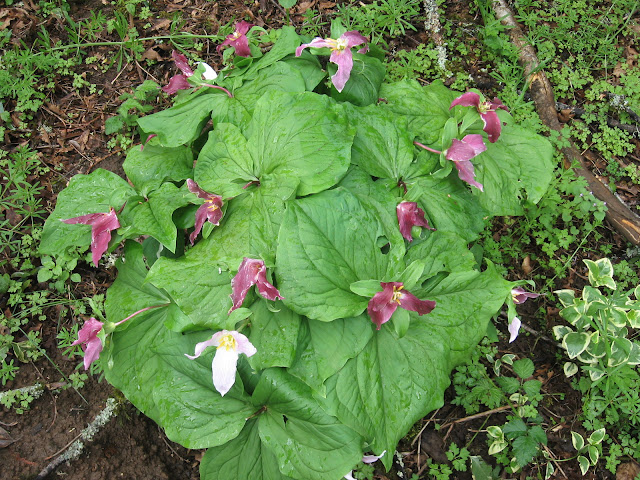 The native low Oregon Holly Grapes, which used to be called Mahonia but has been renamed Berberis  nervosa, are beginning to bloom.  I cooked lots of the berries last year and also removed some seeds before cooking and spread them around some, they make nice drifts in a few areas- 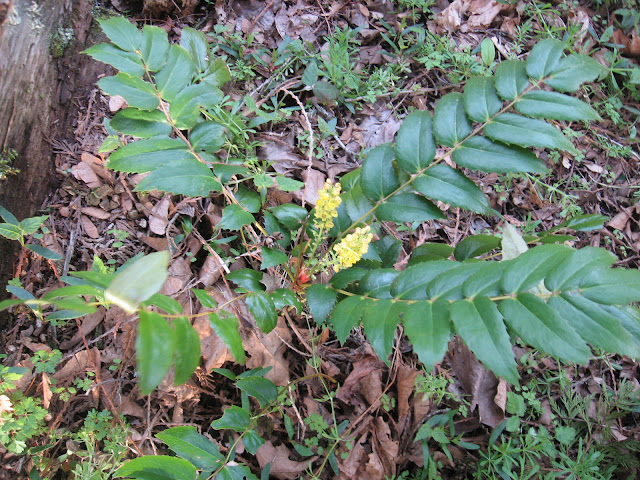 I hope you are taking time to enjoy some of the native plants that come up all by themselves.;)  I'm trying to let more of them take over in more places this year.  I read of a house with a 40-60 year old lawn, can't remember which, that had the grass removed and periodically weeded, and over a couple of years had many wildflowers, shrubs and trees sprout that had been dormant in the soil all that time.  Fascinating.

I have been planting tomatoes out in April for quite a few years since discovering plastic double-walled tunnels.  I looked at 30 year temperature lows for April and there was only 2-3 degrees difference between April 1 and 15, so even tried moving the date to April 1, but this year I didn't get plants hardened off early so planted some out on April 15.  They had gotten too tall for my 11" light shelf clearances, so went into my aquaponics grow bed transplanted into 4" pots for several weeks, and got rather leggy there.   I harden them off on my east-facing concrete front porch, where the morning sun doesn't burn the delicate foliage and the concrete acts as a heat sink. 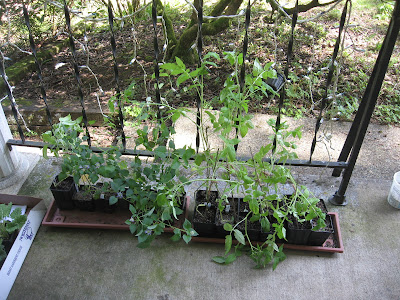 I left them there for a week.  Meanwhile, I was killing weeds with newspaper and keeping the rain off the rows with my tunnels.   So on planting day, I removed those and used my mattock for remaining weeds to clear the row, and dug holes one spade deep and 2' apart.  My amendments include aged rabbit manure, top, and clock-wise compost, lime, glacial rock dust, and red lava rock, which goes into the bottom and sides of the holes to protect the plants from moles and voles, as they don't like the scratchy texture. 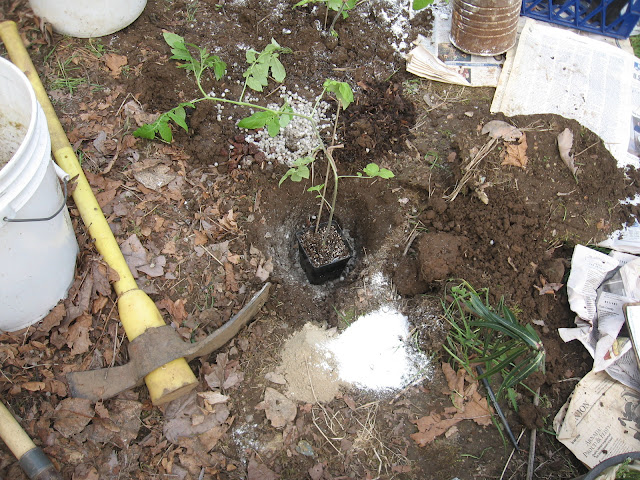 The plants are too tall for the tunnel so I perhaps should have planted them deeper, but will lean them for a while until things warm up.   In the past I have had snow and frosts on the tunnels without injury to the tomatoes.  The first ones I plant out always have fruit earlier than later ones in spite of the cold, so it gives me a jump on the season with at least a few plants.

I went through several years of extensive tomato trials of 60-100 different heirloom along with a few commercial or hybrid varieties,  and found some I liked, but many were in the 72 and up DTM (Days to Maturity) range, which here can be 2 times as long.  After 2 years of very cold June and July temperatures, in addition to our usual cold summer night temps, near 50 degrees F, I decided the only way to make it worthwhile to do all the work was switch to early varieties and also a number of determinate varieties that don't require as much support and time-consuming tying up.

The 3 varieties going out first are Juliet (F? saved) vigorous producer of small paste cherries; Jetsetter, very early and productive small, round and blemish-free; and progeny from what was supposed to be Napoli but wasn't, but was a great little tomato last year, blemish-free, productive and in clusters.  I hope its offspring will resemble it- 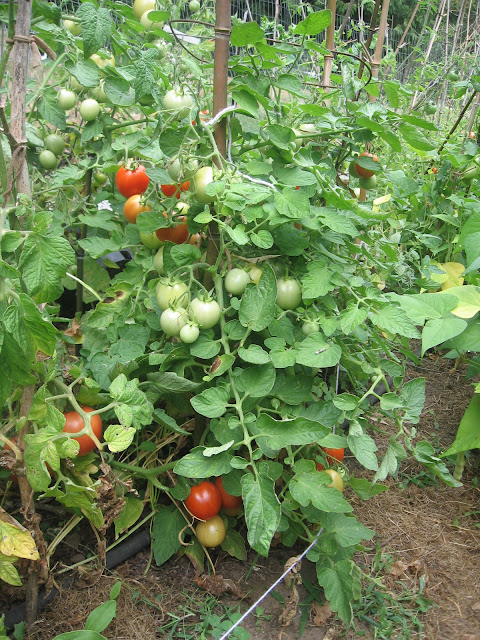 Plants I am continuing to transplant and harden off will be New Big Dwarf, a rugose good producer; Legend, taller but late blight resistant, nice blemish-free round slicers;  Martino's Roma, determinate and productive paste tomato; old favorite Verna's Orange Oxheart, wonderful fruity heart with that delectable meaty texture; Lucky Cross as a gamble because last time I tried they didn't come true, but it is a luscious bicolor, longer DTM; and a saved paste which may have San Marzano as a parent.

The experiment I tried last year interplanting bush beans with tomatoes and eggplants, utilizing the poisonous quality of the nightshades to potentially repel the voles, seemed to work great with little damage to any beans or plants, so I will repeat that again, which is another motivation to plant short determinate tomatoes that won't shade the beans as much.
Planted row- 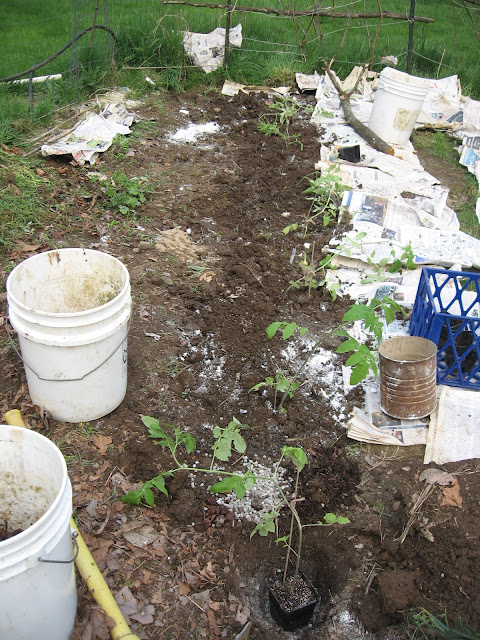 After planting, they were tucked under the tunnel (TunLCover brand) and should have had some Iron Phosphate slug bait applied but I couldn't find any, so they are taking their chances with the slugs.  I will have to hand-water until I get soaker hoses installed, and mulch with dried grass clippings, to keep in the water and smother the weeds.

Back to transplanting,  Hannah
Posted by Hannah at 3:36 PM 7 comments:

Welcome to GBBD!  Join the fun at Carol's May Dreams Gardens.  I'm not showing my ubiquitous daffodils which have been stealing the scene.   Here is a delightful clumping plant, the adorable Brunnera macrophylla, Siberian bugloss, which makes tidy clumps and even reseeds a little- 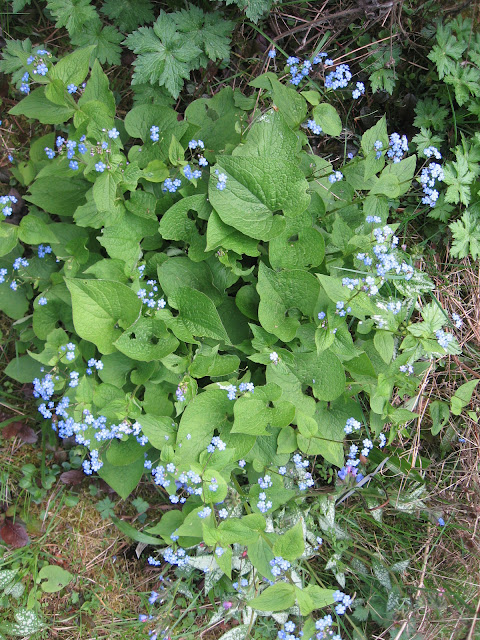 My Pulmonarias are starting to achieve their full glory, here is a favorite, 'Excalibur', they also reseed well- 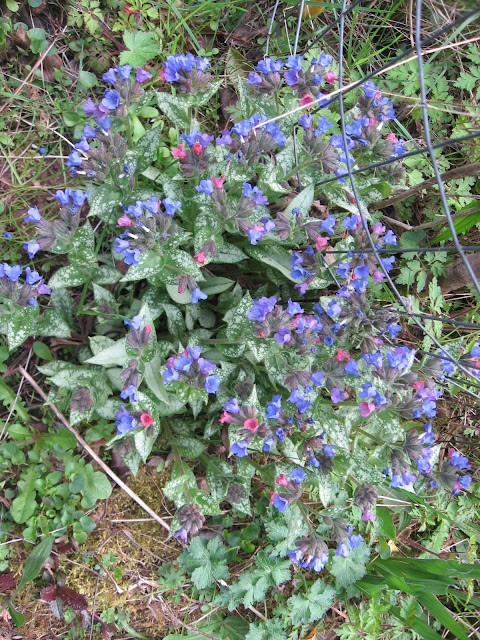 My immense pink Camellia is covered with blooms. 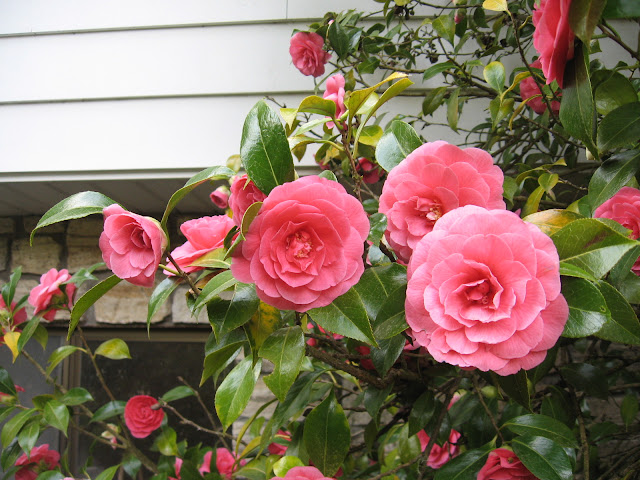 Another redder flowering shrub is the Chaenomeles, Flowering Quince. 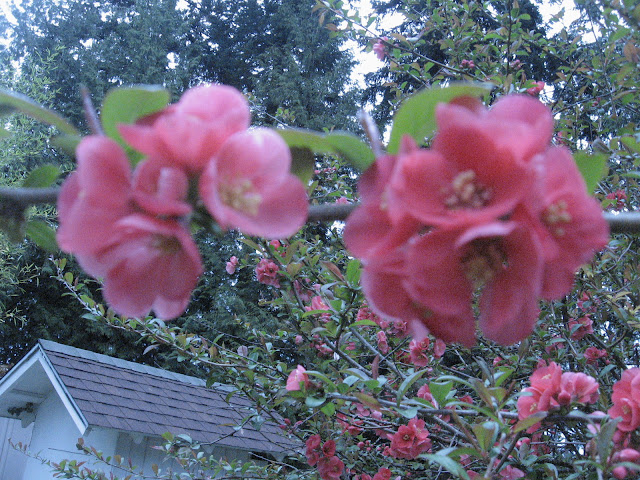 What can be a tree but for me is a large shrub is the Magnolia soulangiana 'rustica rubra', with large slightly fragrant blooms- 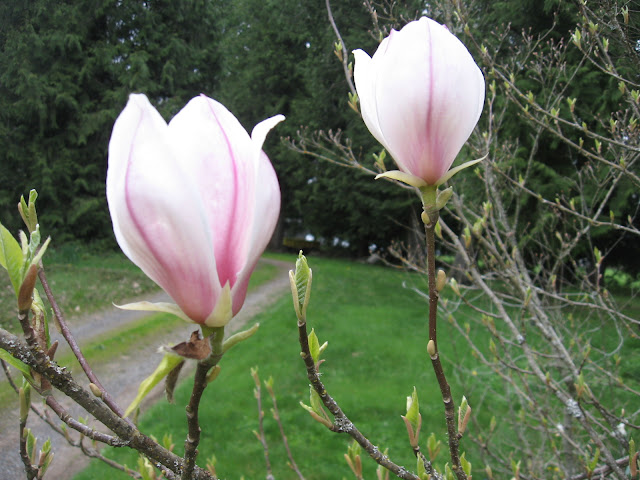 My 4' Daphne tangutica is covered with fragrant blooms, white with a magenta reverse- 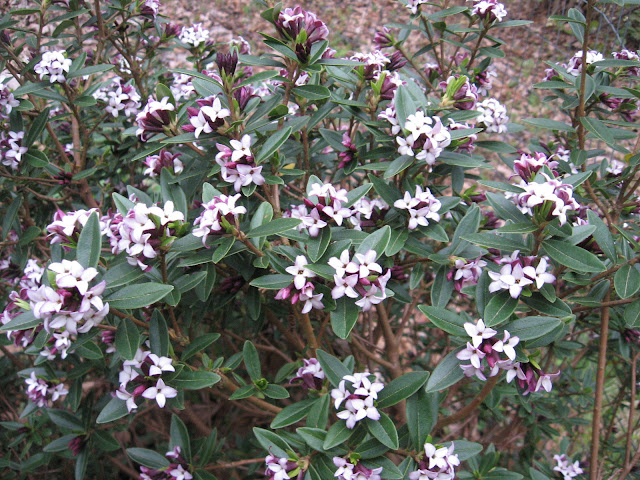 On a smaller scale is yellow Epimedium sulfureum, an excellent ground cover for shade- 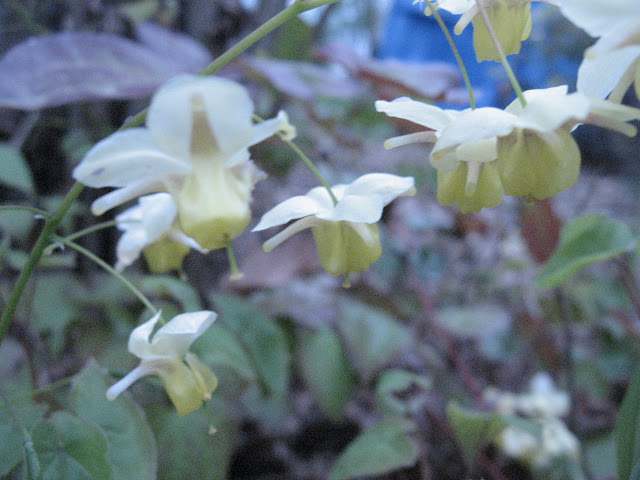 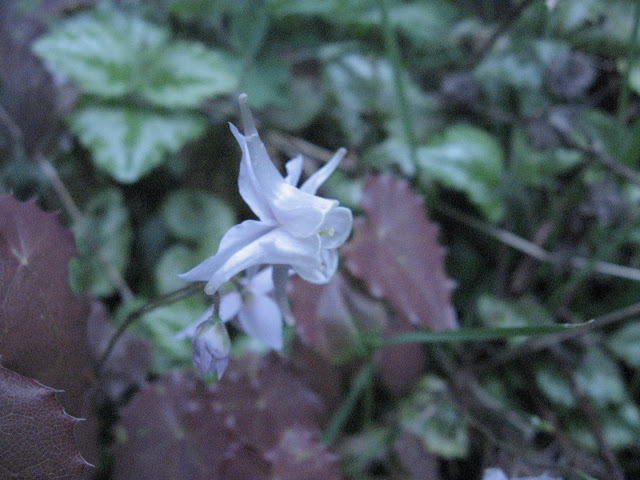 Akebia trifoliata is really loaded with blooms, I hope I get some fruit this year- 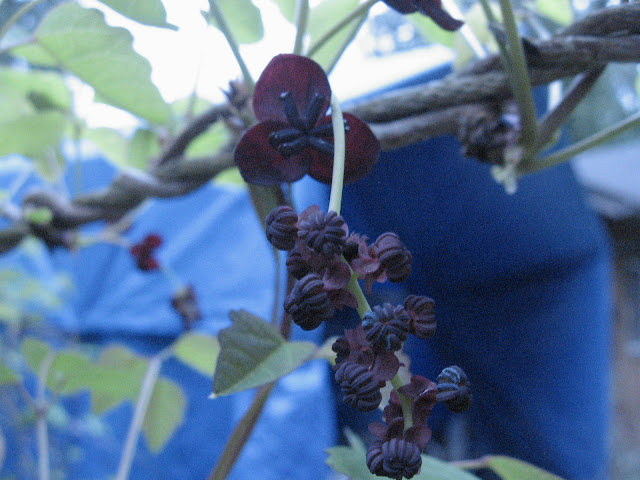 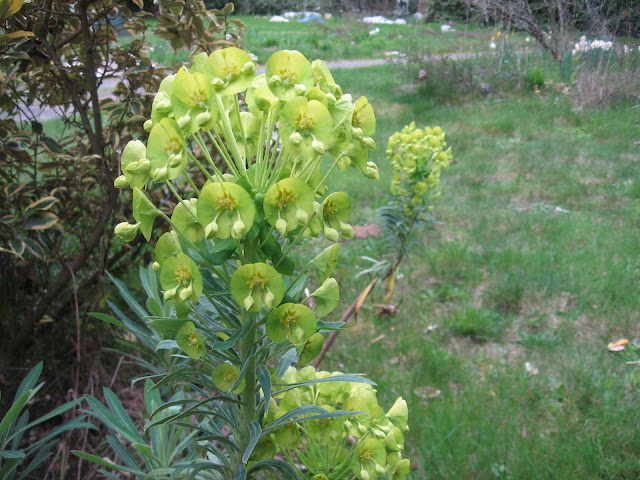 One of my favorite Muscari is laterifolia, tall and two-toned.  It seems to reseed around too, 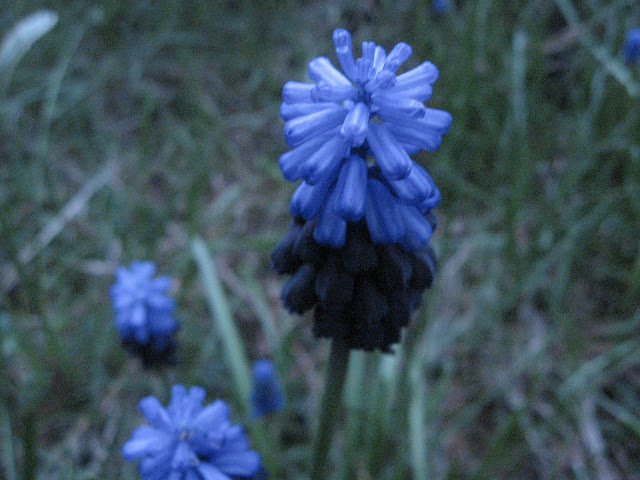 Another smaller shrub, Osmanthus delavayi, is covered with tiny white flowers that waft a delightful fragrance, and when not in bloom have tough glossy holly-like foliage, but tiny leaves- 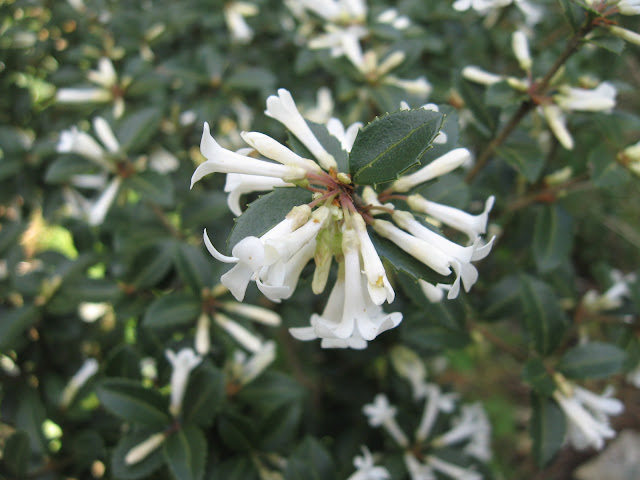 One of my favorite Spring bloomers are carpets of Anemone nemorosa, 'alba' is white but turns pinkish as it ages, while Robinsoniana starts out purple and fades blue.   I dig twig-like rhizomes when dormant in late summer and spread them around my borders.  Within a couple of years they will multiply to come up in sheets of bloom under trees. 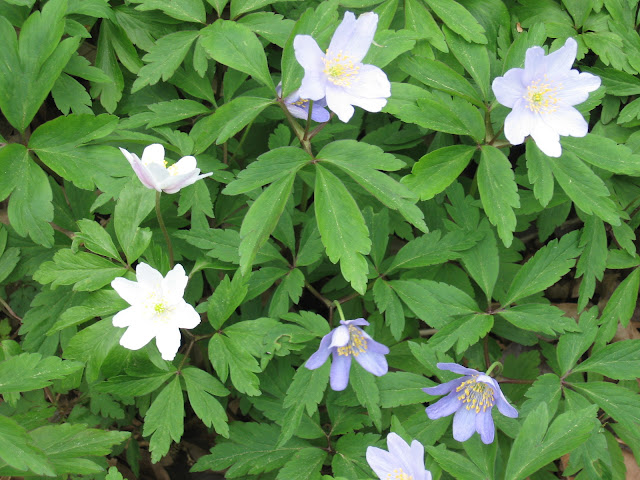 Another carpeting plant that is blooming is ground cover Comfrey, Symphytum grandiflorum, which I find very useful in an orchard under fruit trees to keep down weeds- 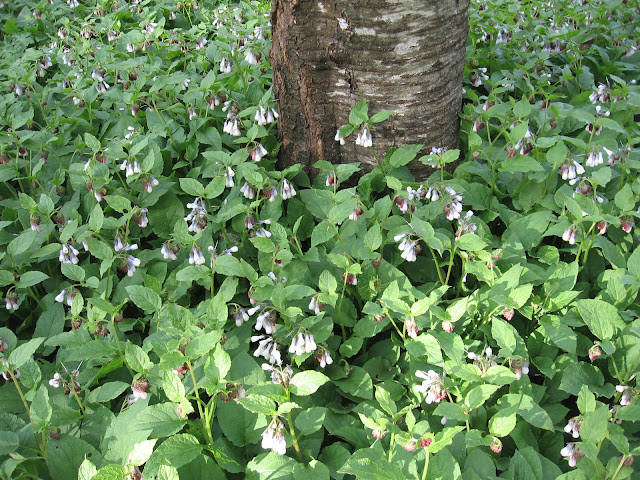 I'm enjoying the long-awaited arrival of Spring, it was worth the wait!  Happy Spring, Hannah
Posted by Hannah at 5:14 AM 7 comments:

I went to the Hardy Plant Society of Oregon's spring plant sale last weekend, now called Hortlandia.  I didn't take photos there but if you want to see some you can look at Scott's.


I bought a really cute plant called a Mouse Plant, Arisarum proboscideum, the blossoms' little "tails" sticking up out of the arrow-shaped foliage.   The flowers have the shape of an Aroid, like Jack-in-the-Pulpit, and are possibly even carnivorous.     I hope I can find the right place to put it, I have had good success with some plants that grow well in the wet part if the year then go dormant when it is hot and dry. 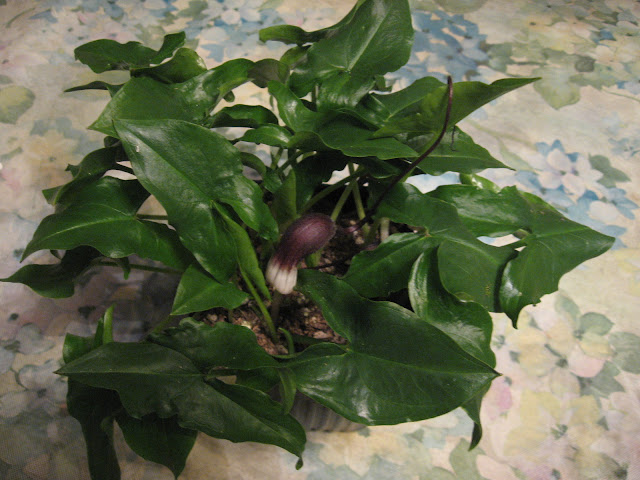 I bought another plant in this category, Primula sieboldii "Ice Princess", with snowflake-like blossoms with a purple reverse.   They are quite popular in Japan.   The tricky part will be keeping them moist enough, but with good drainage, but they will go dormant in summer.  They are supposed to increase. 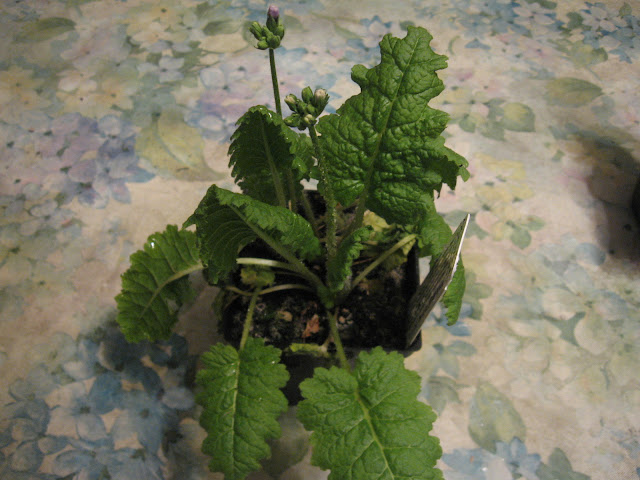 Now some plants I am more comfortable with, needing less water, Aquilegia canadensis, which is a native with yellow and red flowers.   I grew a similar native, A. formosa, from seed last year, but don't know if I can expect it to bloom this year, so I couldn't resist a bigger plant of similar colors. 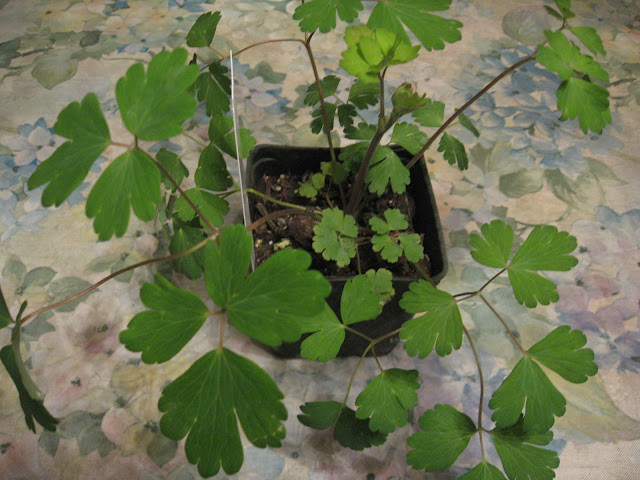 I have a Saxifrage I really enjoy that has spread into a mat and blooms like airy fairy wands every spring, x urbium "London's Pride", a great grower that is a dream to transplant, I just stick a rosette into a new spot and it grows.   So I bought a really cute little Saxifrage kolenatiana "Foster's Red"- 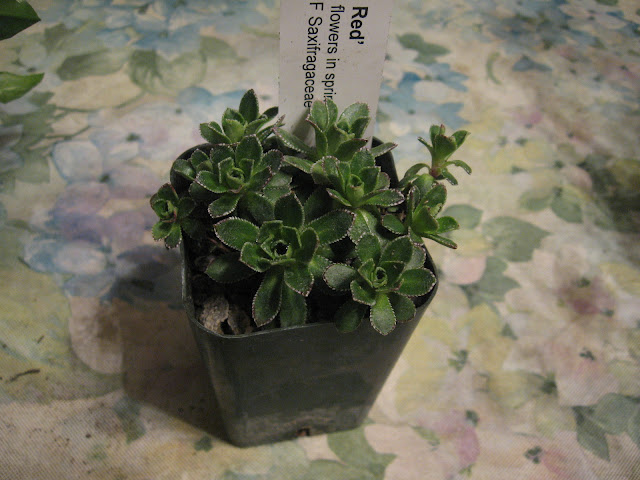 And finally, I got a Geum coccineum "Cookie", which has rather small flowers in a peach color, one of my favorite flower colors, reminding me of sunsets.   I also like it in wall paint. 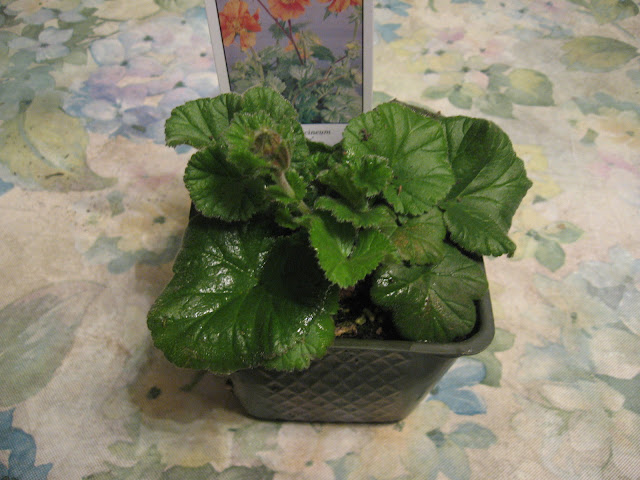 I was working on a Geum collection last year, with seed-grown G. "Mrs. Bradshaw" a fantastic bright red that blooms a long time, and the medicinal and edible G. urbanum, with roots that have a clove scent and taste.   I haven't tried them yet.   This year I am growing G. "Lady Stratheden" with a double yellow flower, and G. "Blazing Sunset", below,  the same bright red as "Mrs. Bradshaw" but larger and more double, which have rather rangy foliage compared to "Cookie."  One I would like to get someday is "Mango Lassi", peach with some red overtones and button center. 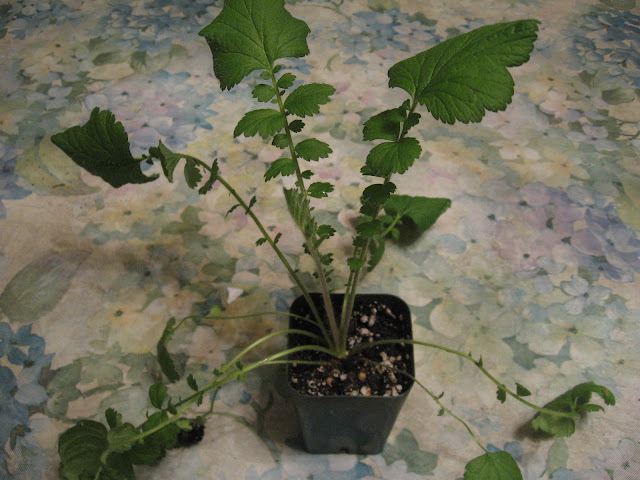 That's the problem with flower shows, so many choices and so many temptations to indulge in plants that may or may not make it in the garden.  Here's hoping...