Voles: Fight to the Finish

Voles, in case you are one of the people who have never heard of these rodents, are New World (Western Hemisphere where we live, N. and S. America) rodents related to Lemmings.  I seem to have a large population in my yard.  If I put a board or cardboard on the ground and come back after a few weeks, the ground underneath will be covered with surface runs, and sometimes with a nest.  Voles like to move into old mole holes, but do not make mounds at entrances to burrows like moles do.  They also are different in what they eat; moles eat earthworms and grubs, but voles like plants, and tree roots- I figured that one out after a full-grown Gala apple tree, loaded with fruit, fell over from lack of root support....

A vole will have a plumper body and rounder face than an Old World rat or mice (from Eur-Asia, or Africa), and will have a shorter tail only half the length of its body.  I have caught a few in just a rat or mouse trap with peanut butter, but generally a used trap catches no voles.  Voles don't bother all vegetable crops, they leave tomatoes, squash, cucumbers, and most greens alone, but they can be very destructive when it comes to beans, especially pole beans.  Once they get used to the plants and decide they like the taste, the war begins.  They will eat the seeds, the sprouts, come up underneath and eat the roots, and most disgusting, nip off the vine as it makes its way up the trellis, even sometimes to the top, covered with blooms.   Arrrrgh.

So my battle plan has involved first getting the seed sprouted and growing.   Soaking them in water overnight and then rinsing and draining them several times a day until the root starts to grow, helps speed up the growth of the bean.  What I have been doing when planting is to dig only enough hole or trench to plant the seed or seeds so as not to loosen up the soil for the voles.  I then sprinkle cayenne pepper on each seed and put a 4" or more galvanized nail into the ground next to the seed, *warning* don't copy this at home since stepping on a nail could give you a nasty wound and give tetanus bacteria an entry into it.  After planting I usually pick some leafy weeds and lay them over the bean rows, then cover with a strip of chicken wire, to discourage birds from digging up seeds before they sprout.  I remove the wire after the sprouts are up.  I have trouble finding all the nails at the end of the season, I think some fall through into vole tunnels and disappear.  They do prevent the vole from coming up under the plant and nipping off the roots and stem, so they have to approach from on top of the ground.  But then stage 2 of the battle occurs, they nip off the lower leaves and can nip the stalk in two.  My approach to this is to cut strips of aluminum foil, around 9" long and cut into 4 pieces lengthwise.  I then wrap each stem with a strip of foil, starting at the ground lengthwise, and folding it around, then folding it again to enclose the stem, trying to leave out any leaves remaining.  The voles apparently can't stand on tippy-toe with their stocky little bodies, and don't like the taste of aluminum.;-) 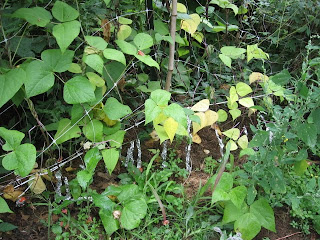 This is a trellis I built last year, designed for Scarlet Runner Beans, Phaseolus coccineus. These have red flowers, much appreciated by hummingbirds. The hummer would perch on the trellis, looking very territorial, laying claim to all the flowers as his personal property.  This year it is covered skimpily by a couple of runner beans from Tompson & Morgan Seeds, Polestar and Wisley's Magic. 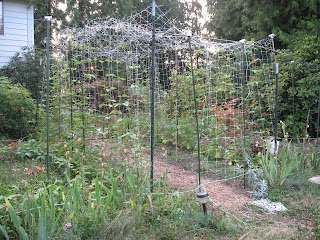 I generally make trellises with T-posts, stringing netting between them, held up at the top with a multi-strand wire cable coated with plastic, weaving it in and out of the top squares of the netting.  I have tried nylon netting made by crocheting a nylon string, or polyproplene monofilament, as in the photo above.  The nylon netting has lasted me several years, but the polypropylene from Johnny's Select Seeds had some broken filaments after one season, though I am not sure what caused it, mechanical injury or animals.  I repaired it by running yarn along the good filaments and across holes to replace the bad ones.  I can go cut a few 8' bamboo poles to place at intervals to give the netting more support, but in the photo I used tubular posts covered with green plastic.  One bed made in a rectangular shape has had more stability and less tendency for the posts to lean over from the weight of the vines.  The trellis pictured was used for Insuk's Wang Kong runner beans last year, and grew fabulously.  The flowers are there in this September photo but may be hard to see. 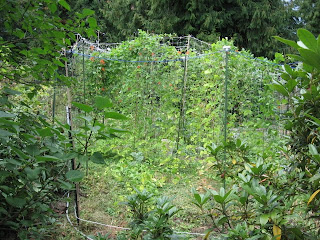 Some other trellis ideas by the great home gardeners on GardenWeb can be seen at-
Legumes forum
GardenWeb has lots of forums on different plant groups, areas, etc. and is open to read but to post you must join; it is free, and there is a lot of information, but there are lots of ads to pay for it.
I got most of the bean stems wrapped with aluminum foil today, so I hope to halt the nipping of vines which had started recently.  Last year I tried the Scarlet Runner Beans (SRB), a different species than the regular pole beans, after reading on GardenWeb that SRB likes cool summers like mine in the Pacific Northwest, which is very similar to Great Britain where they are about the only beans grown, and many varieties have been developed.  I had grown them previously but didn't appreciate them sufficiently because I probably picked them a little too big and they can get tough in the larger sizes after the seeds have developed, though they are good then shelled.  Last year I attempted to pick them at a smaller size and did find them more tender, and liked the taste and the firm texture.  This year I am growing 4 kinds to compare, as well as some regular pole beans- Uncle Steve's, an heirloom bean; Super Marconi, a wide Romano type pole bean; and as an afterthought, I decided to try some Grandma Robert's Purple Pole beans, another heirloom, since they are the fastest to develope and it was getting late to plant pole beans.  The SRB's have been blooming earlier than the pole beans, and will doubtless develope some beans sooner, as they can do better in the cooler temperatures.  Thompson and Morgan have several varieties from which to choose.  Can't wait!
Hannah
Posted by Hannah at 11:23 PM No comments: