Well, my seedlings from last month are getting larger.  I had to move the Butterfly Peas and Andrographis paniculata into my hydroponics set-up so they could get taller.  I clipped leaves off the lower stems of the Andrographis and pinched out the top  growth so I could dry some of the leaves and make the plants bushier.  I often grow herbs and at some point they die without my benefitting from their growth so I'm trying to actually use some. 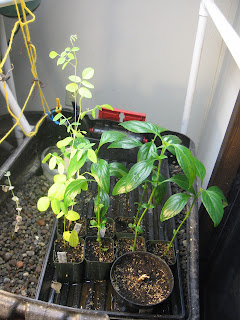 The Culantro, Eryngium foetidum, which has a flavor like Cilantro but is not related, is widely used in Mexico and Central America.  It is doing well and has been used in cooking a little so far.  The 6 varieties of Alpine Strawberries are coming along nicely and should be able to bloom and start bearing fruit sometime during the next summer. 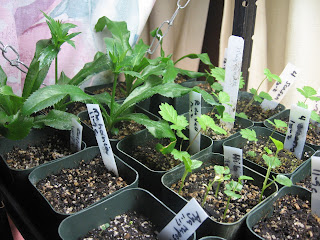 In addition, I have some seedlings from seeds sown in October and  kept in the refrigerator until earlier this month.  The bottom right seedlings in the photo above are Hibiscus lasiocarpus.   Some Purple Milkweed, Asclepias purpurascens, came up as well.  And the very exciting Mertensia virginica, a Bluebell native to the eastern United States, has a single seedling up.  I failed to germinate any last year so it seems like quite an achievement.   Most pots are still sitting there with no growth, though.

More pots are in the refrigerator, among them some seeds that got temporarily mislaid that I found this week, all with edible berries, Rhus trilobata, Rhus aromatica, and Berberis fendleri, which High Country Gardens describes as tasting like sour cherries.  The rest are some new natives I'm attempting to grow, Houstonia rubra- very fragrant, Eriogonum ovalifolium, Asclepias asperula, Aquilegia formosa- a lovely red and yellow native columbine, and Agastache cusicki, a native licorice mint that needs chilling.

Under lights I'm starting more Agastaches- cana, aurantiaca, occidentalis, and rupestris.  These are very popular with bees and butterflies, and have fragrant foliage like peppermints and spearmints which are mostly non-native, but tend toward the anise and lemony fragrances.  They can also be used for flavoring dishes and dried for teas.  Some are starting to sprout at about 8 days after sowing.  I also sowed more strawberries, native Rudbeckia fulgida Goldsturm, and a lot of Dianthus superbus, the Fringed Pink, which has edible uses and is very fragrant. 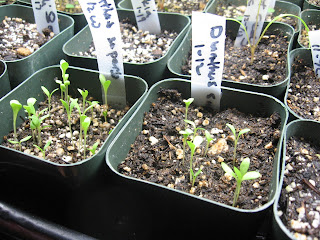 I like to start some seeds by putting them in small ziplock bags from Michael's, with a piece of damp paper towel, so there is not as much loss as those started in pots.  Tomatoes, squash, and cucumbers do especially well like this.  Old seeds that failed to grow for me for several years in peat pots started this way.  I wait until the root has grown out a cm. or more then plant the seed in planting mix with a compost, peat moss, and perlite, which I heat in the microwave before planting to hopefully kill damping off fungus and fungus gnats.  So far I sprouted a bunch of Cardoon, and just started several eggplants.  Next will be some peppers and a few tomatoes, though after last year with so much cold weather in June and July, and consequent very late and poor tomato crops, I'm not growing many tomatoes this year.  I do hope to have good crops of beans, greens, cucumbers, and squash though, which did not seem very affected by the cool weather.

So, jump in and grow something under lights, it's fun to have only fungus gnats gnawing on my plants' roots instead of voles!

Hannah
Posted by Hannah at 12:21 AM No comments: