Here is a sample bed I'm working on, one of my worst weed-infested beds since it is next to the lawn full of unscrupulous grasses knowing no boundaries and giving no quarter.  I initially killed the grasses and weeds in this bed with newspaper and black plastic, and this lasted for a while but the main plants in the bed were too vertical, like irises and daylilies, and some fig trees, and there was not enough ground coverage so the grasses invaded again.  This first bed had a second newspaper treatment over winter and is partially bare enough to allow planting some new plants that should give better leaf coverage, some hollyhocks. 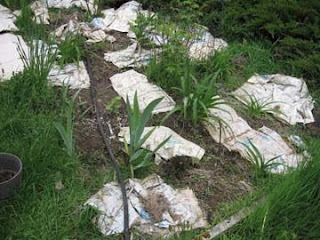 The next photo is of an area where some Columbines and Figwort are already growing and competing with the grasses for coverage. 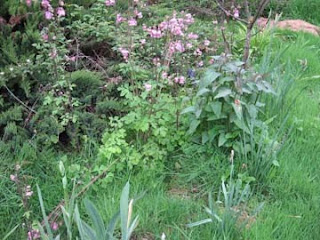 And along the driveway under some Red Cedars, I planted sword ferns, and variegated Vinca minor 'illumination', but the grey-green clumps of Rose Campion, Lychnis coronaria, sowed themselves in a row that will burst into deep hot pink blooms later in summer. 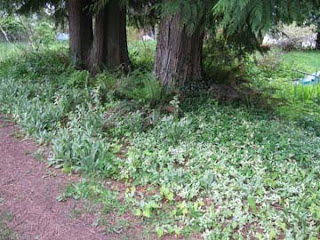 A sloped bed that is a work in progress, also winter-killed with newspapers, has Lady's Mantle that had self-sown elsewhere and been transplanted, a native Shade Phacelia nemoralis, and a favorite ground cover and edible salad plant, Corn Salad, which will self-sow and grows in the winter.  There is still a little grass but it is slowly being crowded out. 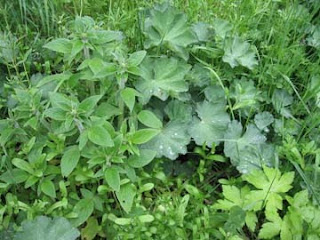 This bed was an attempt at a grey-green themed bed, with Festuca, Irises, and Alpine Pinks along the front.
The pinks looked great the next year, but were slowly invaded and overgrown with grass... 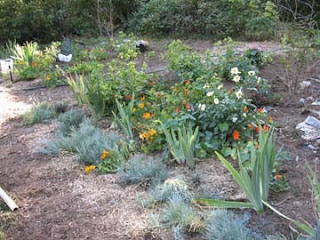 This is the right side of the bed (note irises along front), and has been taken over on the left side by a lovely bed of Sheep Sorrel, which can be eaten in moderation in salads and was very nice in late fall and also in early spring but is now going to seed.  An Amber Ghost Japanese maple is in the center, surrounded by Heucheras of various leaf colors.  A Wormwood plant lends some grey-green to the right, and the wild Dovesfoot Cranesbill, Geranium molle, is behind the irises. 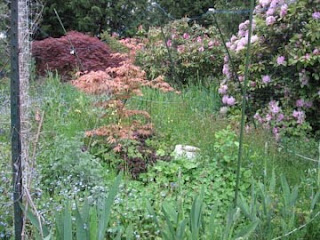 Some contrast of the Amber Ghost foliage and Crimson Curls Heuchera-
And another Heuchera with silvery accents, Hollywood.
Lastly, a view of our front bank, which used to be a mess of grasses and weeds that I had to weed-whack, but I planted ground cover Comfrey grandiflorum, Geranium macrorrhizum, Hypericum calycinum, and some Sword Ferns, and let them fight it out, and there are massive Rosa Rugosas at the top of the bank which bloom profusely in spring.

Kind of a divide and conquer strategy.  Weed replacement takes a lot of strategy, because it is a battle, millions of them against one of me and my hopefully growing army of successful (invasive, self-sowing, native) plants.  Win a few, lose a few.  If one plant doesn't succeed, what's next?

© Weeding on the Wild Side, all rights reserved. Any material copied must link back to this website, http://weedingonthewildside.blogspot.com
Posted by Hannah at 1:33 AM