Chilly Green Tomatoes Get a House

This year has been good for vegetable production for the most part, especially the squash, cucumbers, beans, and mustard greens.  But tomatoes have been very slow because of the long period of cold wet weather in June and July.  So I just finished a plastic hot house to warm them up.  I start my tomatoes under lights in January, using small ziplock bags with a piece of wet paper towel inside to start the seeds, which must then be taken out and transplanted to a small pot after they have sprouted and grown a root.  I use Anderson Die and Manufacturing Co. rose pots, which are 2 1/4" squares and 3 1/4" tall.  They are nice because they fit 4 x 9 into the common black plastic flats sold at Fred Meyer and other outlets.  The flats fit 2 per shelf on metal shelves available at hardware stores, and a three-shelf unit can hold 2 shelves of flats with 4' fluorescent fixtures suspended from the shelves above = 144 pots. 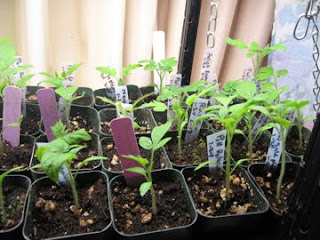 Tomato seedlings in Rose pots
The chains to the right come with the fluorescent fixtures and can be hooked into holes in the vertical posts of the shelves.  I make some plant markers out of cut up milk cartons.  After the plants reach the lights, at about 11" tall, they are ready to plant outdoors.  I  checked 30 year weather reports and found that lows are typically above 32* F around April 15, but only 2-3 degrees lower on April 1, so I start planting out in early April under TunLCovers I have bought from the manufacturer or from Gurney's.  They are double-walled and have kept tomatoes safe through snows and frosts.  They are 18" tall and wide with metal ribs that push into the ground. 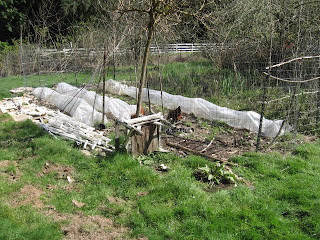 TunLCovers drying soil
The really great thing about the tunnels is that they keep the soil dry underneath them, so I put then out a couple of weeks before time to plant and use them to dry the ground enough to plant, since working wet soil is destructive to soil structure. So I just have to wait for a day with a few hours of dry weather to get some planting done. 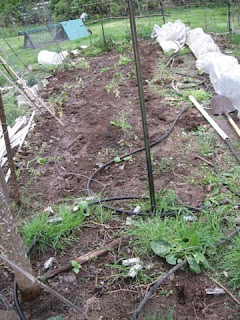 Tomatoes, planted 2 rows on the left, one on the right because of space constraints, T-posts already present.
Since I have problems with moles liking freshly dug earth to come up to the surface next to the plants, I loosen up only enough soil to plant the tomato, around a shovel depth and 12" or so wide.   I put rabbit manure in the bottom of the hole along with some lava rock to make it a little scratchy for the moles and voles to dig there, and then mix in some compost, glacial rock dust, lime, and mycorrhizal fungi with the soil when planting.   I try to get the plant as deep as possible in the hole since tomatoes will root all along the stem where covered with soil.  For several years I have been trialing lots of tomatoes, like 60-90 varieties per year of mostly heirlooms, so I have planted them 18" apart in the row and double rows 18" apart to get lots of plants in.   I then run wires down the rows from T-posts with crosspieces to make 2 rows per post.  I space out tomato cages at intervals to help support the wires so they don't sag, and at the higher second level I use bamboo stakes, usually more than one per plant, which are also fastened to the wire and help hold it up.  I then have to spend time tying up tomato vines to the bamboo and wires.
But this year I decided to plant fewer tomatoes, my best 13 varieties from last year's trials, and have them 36" apart.  I also tried building tomato cages out of PVC pipe, then decided to build a roof structure to hold up plastic film to make a temporary warm structure to hopefully boost production and prevent late blight by keeping rain off the tomatoes, since rain splashes mold spores up on the plants and gets it started.  I got the ribs done- 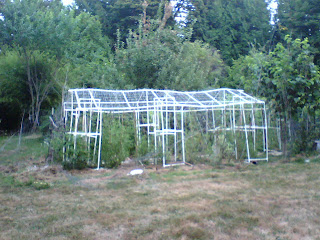 Then rain was expected the next day so I got the plastic on as well, and after experiencing a lot of problems last year with it blowing off since it was put on lengthwise, 10' wide, and didn't come down all the way, I ran it across this year and all the way to the ground so the wind can't get under it as well. 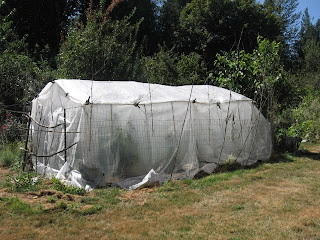 Finished tomato house
It will take some storms and high winds to see how it does this year.  It should keep the temperature much warmer at night and hopefully speed ripening, which has been very slow this year because of the cold spring and the cold night tempertures.  Verna's Orange Oxheart did yield 14 oz, 10 oz, and 10 oz tomatoes for earliest large tomatoes.  Other tomatoes I'm growing are Bloody Butcher, Gogosha, Japanese Black Trifele, Jetsetter, Juliet F2, Legend, Marvel Striped, Nepal, NoID round one I call Perfect 10, Plum Giant Ukraine, Roughwood Gold, and Sochulak.  There are lots of green tomatoes so hopefully soon enough for some tomato sauce. 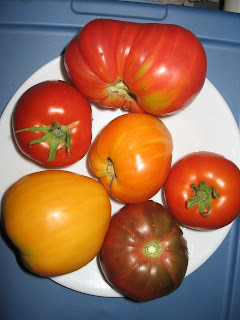