Some people shy away from once-blooming roses, preferring roses that will keep on blooming throughout the summer and into fall.  But the Old Garden Roses (OGR) that bloom only in late spring to early summer really go all out to please.  And many are very tough, the Gallicas tend to sucker so spread slowly into a rose thicket.  Most are hardier and more disease resistant than the modern long-blooming roses, which were bred from China repeat flowering stock that was less hardy.  The once-bloomers can concentrate their energy after blooming into growth and preparation for winter so can endure more drought and poor soil.   The Gallicas are blooming now.  Tuscany Superb is a very dark red, verging on black. 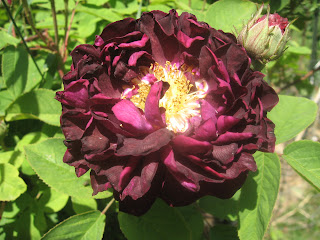 Belle de Crecy is more of a mauve color, and very vigorous at making a thicket and suckering. 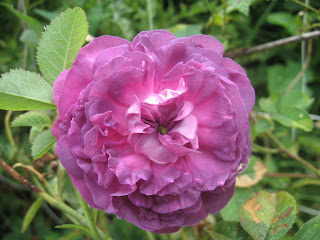 Rosa Mundi is a typical  Neyron pink rose color variegated with white.  It is a sport of the Apothecary Rose which was the rose used in Medieval for healing and anti-bacterial properties.  Its fragrance has calming and restorative qualities. 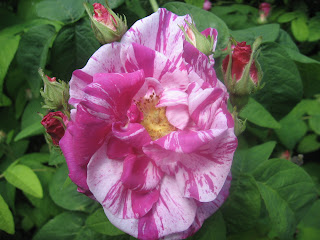 Another Gallica that was ordered as the red James Mason, turned out to be a white with pink edges that someone ID'd for me as the Leda Damask rose. 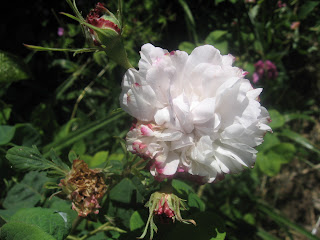 Finally, I was given a NO-ID rose that is a very vigorous climber or rambler, with flattened full white flowers and pink buds, and a delightful fragrance that wafts.  I just put in an inquiry on the Antique Roses forum on Gardenweb, so perhaps someone will ID it for me.  The choices so far seem to be Madam Hardy, but it is supposed to have thorns, and Mme Plantier which does not.  Mine is thornless but looks more like Madam Hardy. 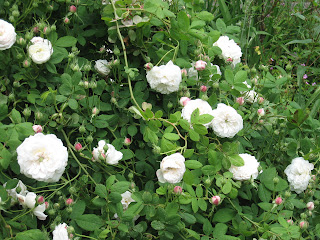 I am impressed since it shows no signs of the die-back disease that decimated some of my other OGR climbers.  Someone ran into my fenceposts and fencing supporting the rose so it is in total flop now and I will have to see if I can get it back up after it is through blooming.

Some other OGR's are blooming now as well, with repeat flowering ability.  Hybrid Musks have been good bloomers for me, especially Cornelia, with larger 3" blooms- 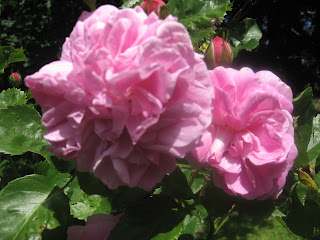 And with smaller blooms and a slightly smaller bush, Penelope.  She blooms in larger clusters and fades as the flowers get older. 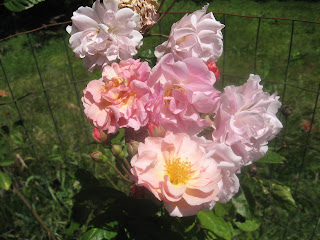 Felicia has been very slow growing but surprised me this year by growing over my head, finally! 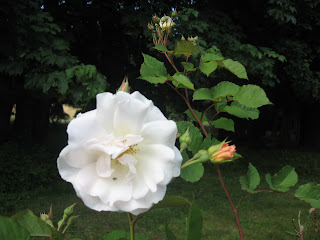 Lavender Lassie has been very slow growing, still rather small and with few blooms, but a little larger each year and still alive.  Buff Beauty did not make it through its first winter but I may try it again someday.

A prolific bloomer I discovered in the San Jose Heritage Rose garden is Excellenz Von Schubert, a Polyantha rose, with many clusters of small fragrant roses. 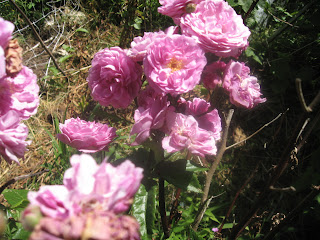 Another Polyantha with small blooms of densely packed petals (100) has exquisite fragrance but tends to ball in damp weather, Clotilde Soupert. 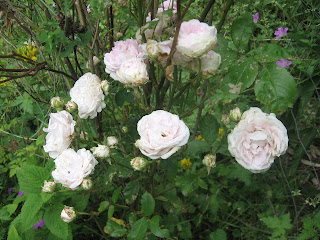 Finally, one that is surviving and doing well in a bad strip that has killed a number of Tea roses is Ghislaine de Feligonde, a rambler, still around 3' tall but growing- 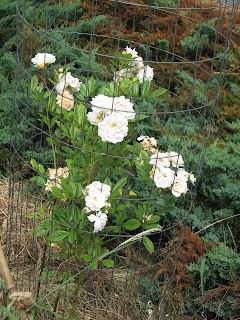 Her flowers are small with yellow buds that open yellowish white, then eventually fade a little pink like a lot of yellow roses. 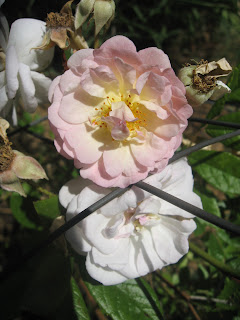 So, take time to smell the roses!