Deer plus Continuing Bloom Plus Critters September 6, 2014B

Oops, the deer will be next week.  Today I am linking with-

This week I had a few exciting glimpses of the Pileated Woodpecker, inspiration for the cartoon Woodie the Woodpecker, he is a very large woodpecker at 15" / 38cm, and therefore does not have a diet of only insects but also likes fruit.  I've seen him eat elderberries, but presently I've seen him on my apple trees, he likes to peck holes in them.   His loud jungle call echoes through the trees.  My grandkids were very excited to see him when they visited.   I was able to zoom in on him when I could barely see him in the tree, so the picture quality is poor, but you can get an idea of his size and splendor. 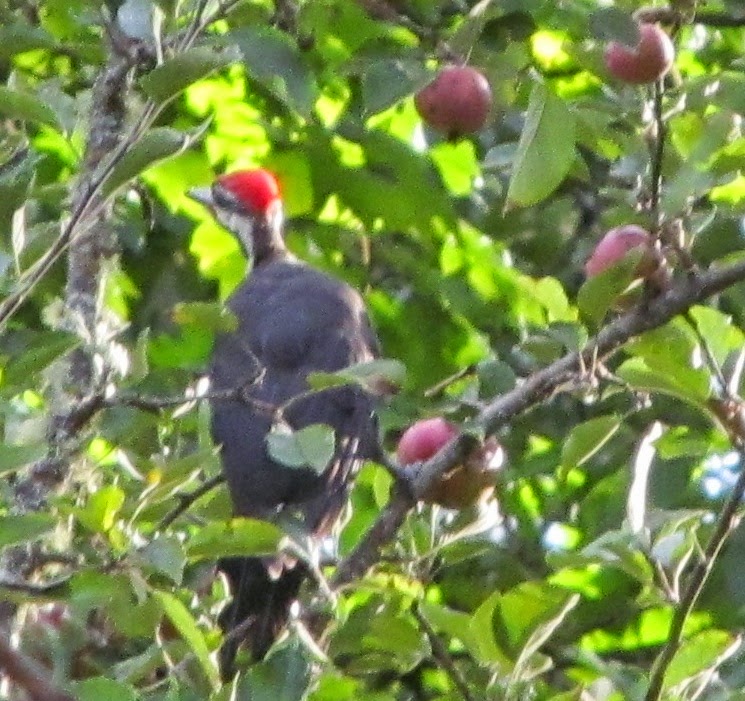 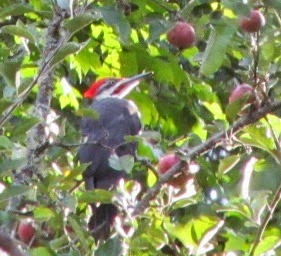 Another exciting thing for me is to grow Delicata squash for the first time.   The vines are very attractive, and they are setting on fruit well.   A couple of small ones broke off the stem when touched so I suppose they are mature.  I hadn't actually eaten them until last year, and was surprised how tasty they were, they also have the distinction of having very thin peels that can actually be eaten.   They are heavenly roasted cut side down with butter until they start to brown. 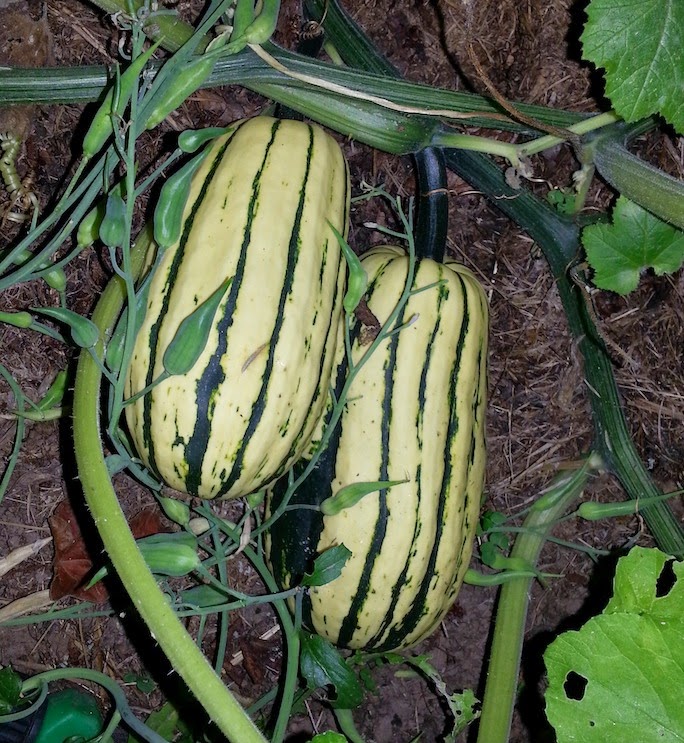 Another thing happening this week is the start of the dried bean pod harvest, so I've been doing lots of shelling.   The runner beans are magnificent large beans which have rather fibrous pods which are best eaten when the seeds have not developed much, but for a real treat I let a lot of pods fill up with fat seeds, and eat some as shellies and some I dry.  The shellies swell up to over an inch in length and have a wonderful potato-y texture.  I have been growing the red-flowering purple runner beans for a while, beloved of hummingbirds, mostly Insuk's Wang Kong variety, see the Gardenweb legume forum if you want to learn something about them.   I have bought a couple more varieties, one has very long pods.   But last year I also started growing one with white seeds, which I think are even larger and tastier than the purple beans as shellies.  Aren't they pretty- 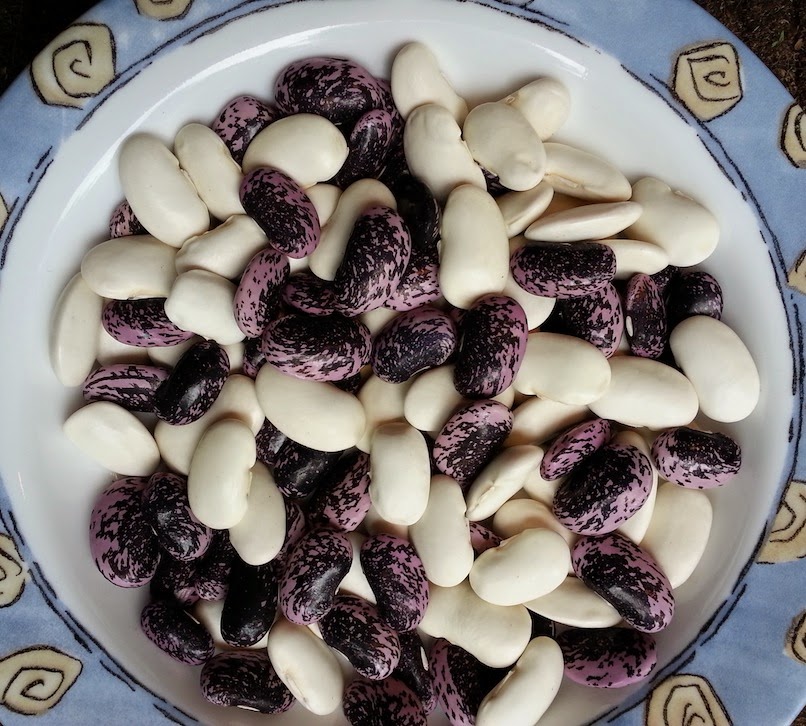 Here is some progress on the sprouting of the Broccoli Raab and Radish seeds in my new cool season bed. 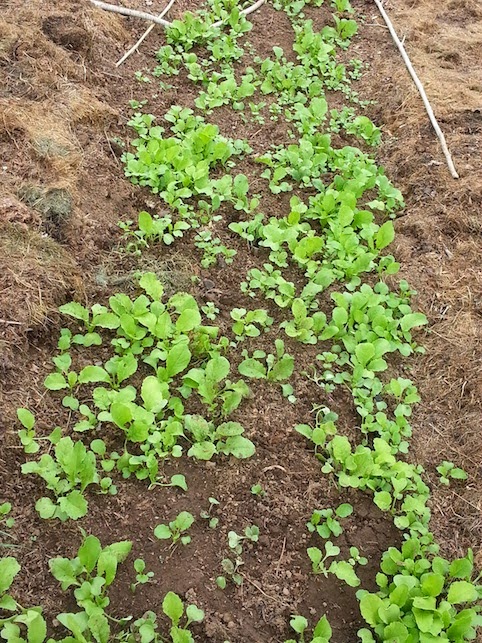 I had to use my castor oil formula a number of times on the beds but am still having some mole damage, which I hope will lessen as the plants get larger.   My son came and helped pound in some T-stakes so I got a better fence done and added some bamboo poles, and welded wire fencing.   As an improvement on my usual deer fence which is just running several horizontal lines of wire up to 8', I am hanging plastic mesh trellis webbing with multi-filament plastic-coated clothesline wire at 8-9' which would be impossible to jump through.  I haven't had much trouble with deer jumping into this bed, just once I forgot to close the gate and a deer came in, when he saw me coming he managed after 2 tries to jump through between the lower wires and the fence, after crashing into the fence and bending it.

My Cardoon plant is blooming for the 3rd year, it is in the thistle family and the stalks are eaten, tasting rather like artichokes.  It was covered with bees, apparently a good nectar source. 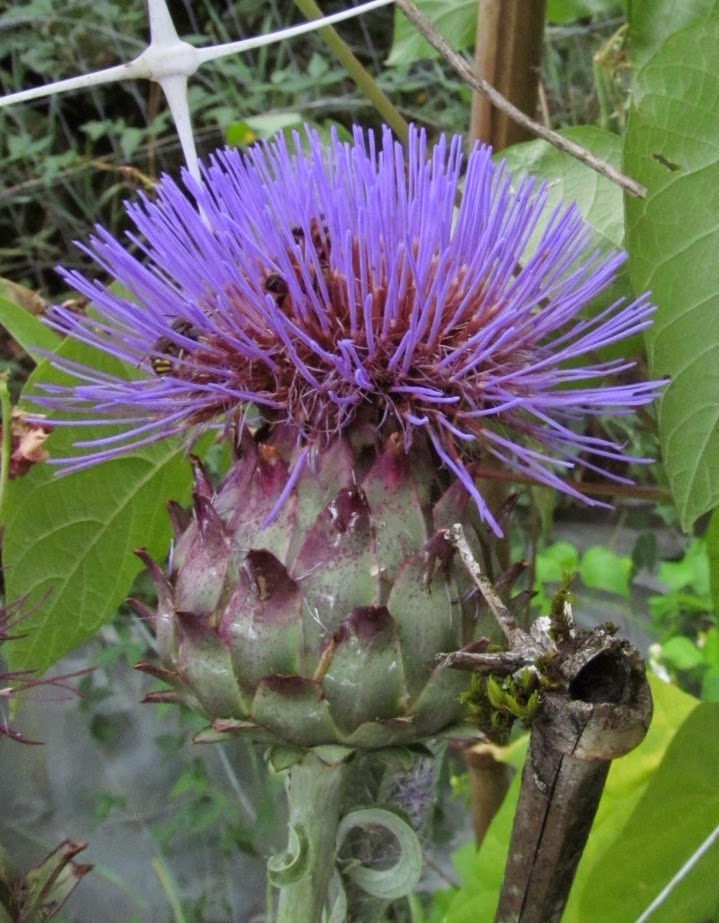 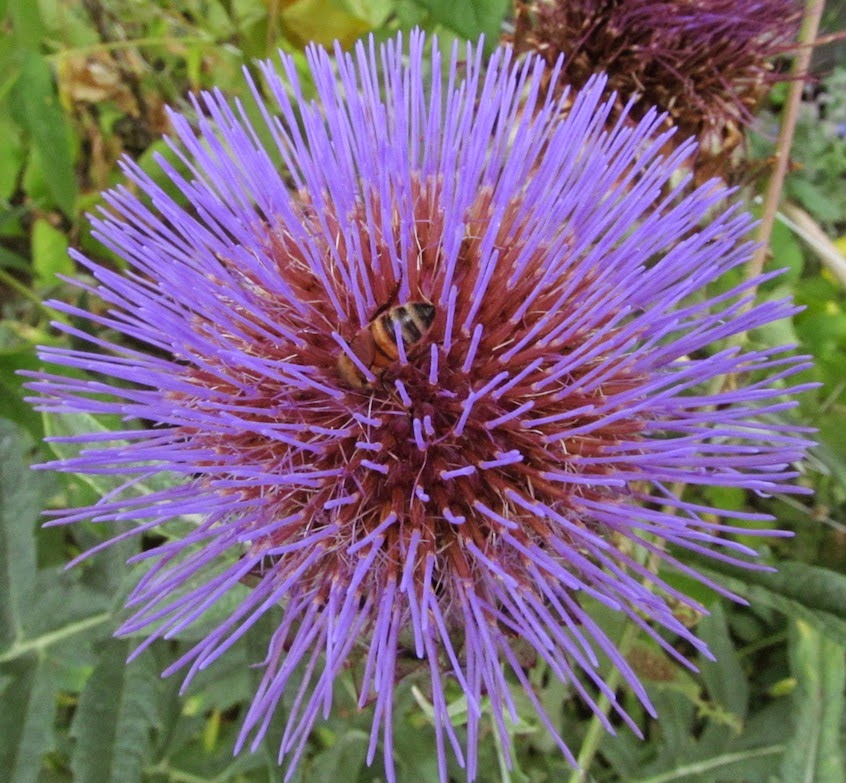 Here is a Canadian thistle for comparison, a bad weed that I'm perpetually fighting and I try to keep it from blooming and pull them up as much as I can.  I found that the flowers actually have a delightful scent.  To see my post on the biological control insect Thistle Tortoise Beetles, click here. 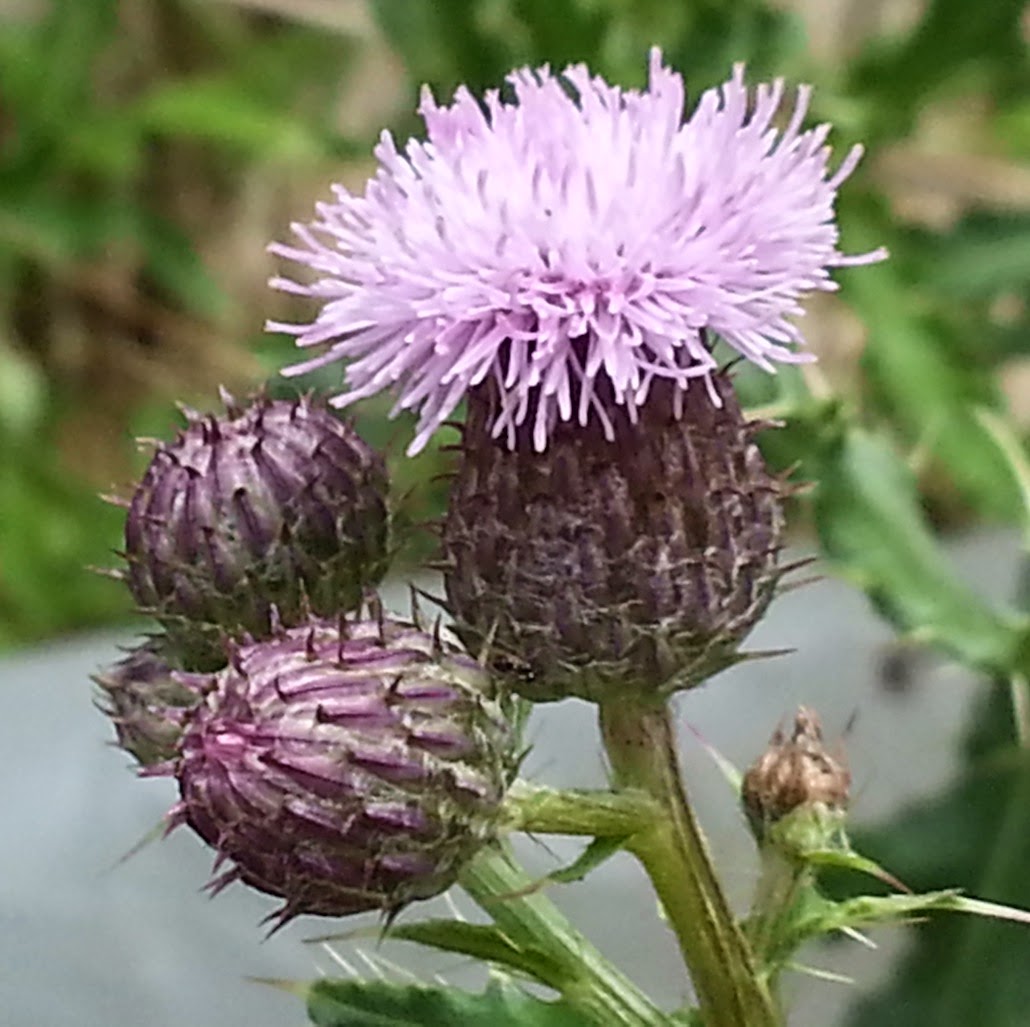 Here is a garden spider from the underside, somehow his posture reminds me of a person in a costume.  They get rather annoying with their webs everywhere in the fall, especially when I walk into one with my face.  I'm hopeful they are clearing out all the pesky insects and not the bees.

My Browallia americana, a favorite annual last year, managed to self-sow and is blooming now on short plants. 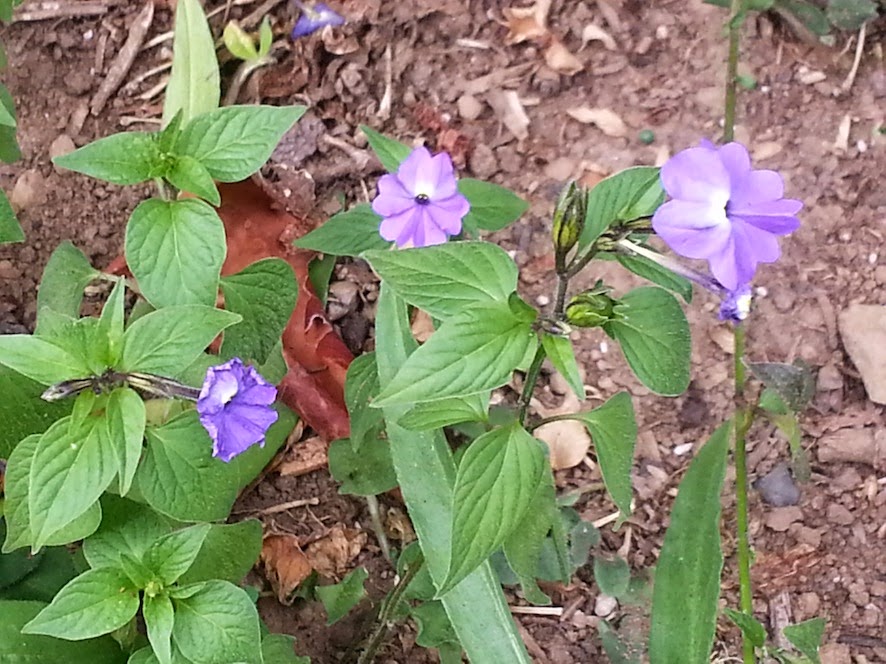 This year I am also growing the shorter and larger-flowered Browallia speciosa, which does wonderfully in a container. 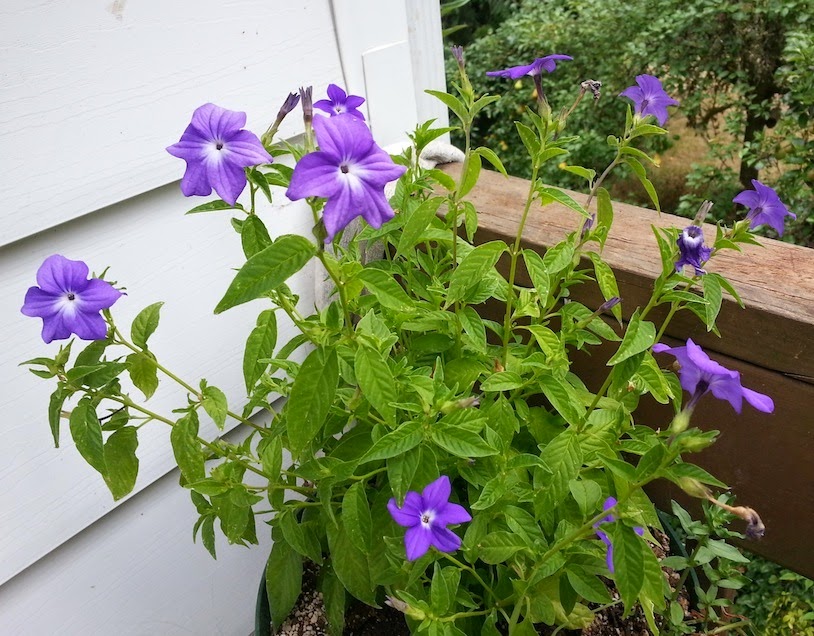 Another square of the big quilt someone made for the local fair, Happy Blue Monday! 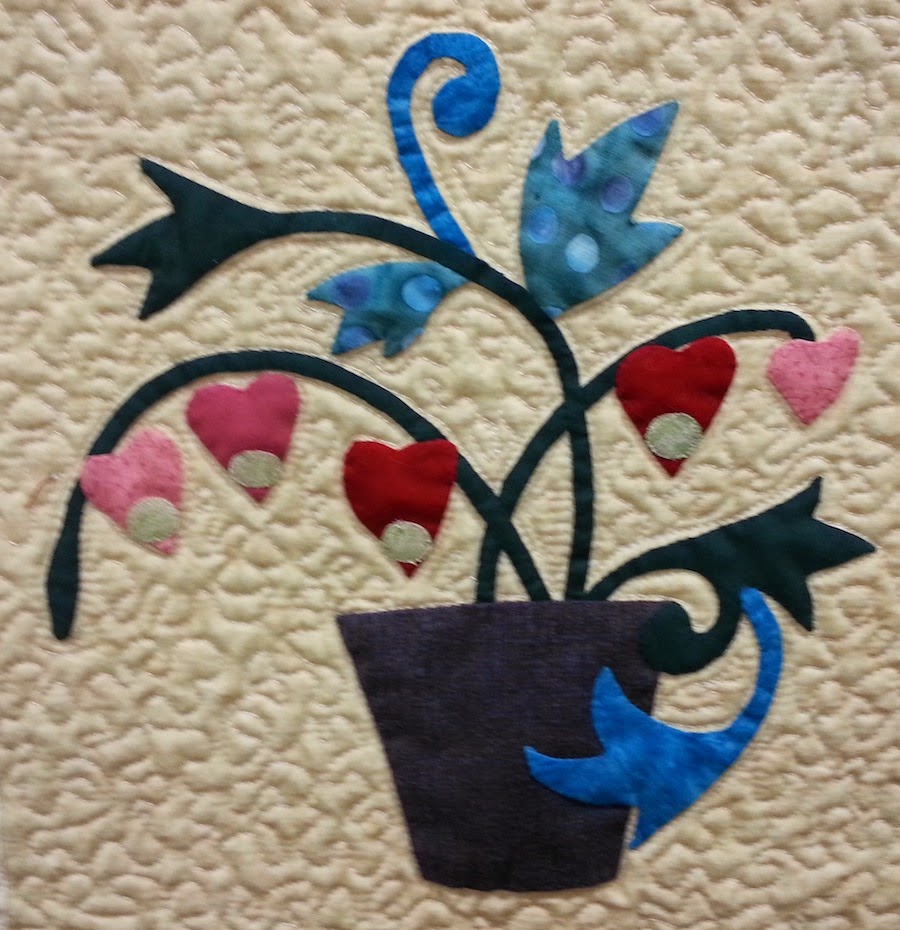 or cameras are macro

©Weeding on the Wild Side, all rights reserved.   I enjoy visiting and commenting on your blog, but if the only comments are through google+ I am not signed up for that so will comment here unless you provide an email link.
Posted by Hannah at 4:03 AM