Progress in the Vegetable Patch

I have several personal deadlines for getting vegetables planted every year.  The first relates to tomatoes, and involves getting them seeded 6-8 weeks before setting them out in April to May.  I currently am starting most tomatoes, peppers, eggplants, squash, and cucumbers in ziplock bags rather than in peat moss jiffy-7 pots or in peat moss/ perlite/ compost mix that has been microwaved to kill fungus spores.  I have had much better success sprouting and growing seeds in the ziplock bags, obtainable at a Michael's or other stores selling beading supplies.  A piece of paper towel is cut to fit inside the bag and moistened, then seeded and labeled.  A much higher level of sprouting and successful propagation has occurred for me, so that I am now starting particularly tomato and cucumber seeds that are 8 years or more old that initially had zero success in peat.  This year Azure Paste and Novinka Kubani seeds sprouted for me for the first time so I will hopefully get to try them.  After the seeds sprout and the seedling root is 1-2" long, I pull out the paper towel and remove the seedling to plant in the above mix, in 2 1/4" rose pots that fit nicely in 10 x 20" flats, 36 to a flat.  The flats fit 2 to a shelf, on metal shelves with 4' fluorescent fixtures hung from the shelf above, so a 3 shelf unit holds 6 flats = 144 plants. 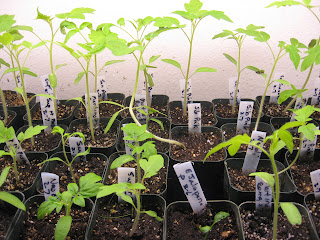 I transplant tomatoes outside at around 11" tall, when they grow up to the lights, hardening them off first on my concrete east-facing covered porch, starting when 30-year temperature charts indicate lows of 32* F / 0* C, under tunnels that are double-walled plastic with wire ribs at intervals to push into the soil.  The tunnels are 18' long, and about 18" tall in the middle and wide (brand TunLCover, carried by Gurney's and other garden catalogs or from the manufacturer).  This covers quite a few tomatoes in a straight line, planted between 18 and 36" apart.  Tomatoes and especially squash show marked boosts in development compared with plants not covered in my garden.  So here in the PNW, maritime zone 8, I have planted out as early as April 1, though usually a week or two later.   A major advantage of tunnels is that they prevent rain from reaching the ground underneath them, so I use them to dry out the soil in my rows for planting.  Since this is the rainy season here, I otherwise would have a very hard time finding a space between rains long enough to dry the soil sufficiently. My favorite way to prepare garden beds for planting is to cover the beds with layers of newspaper long enough to kill all weeds, then I put on tunnels to dry the soil for several weeks before I pull up the newspaper to plant, amending with lava rock (scratchy, somewhat protective from digging animals), animal manure such as rabbit, chicken or duck, glacial rock dust for minerals, compost, and lime.  Digging only the actual hole needed for each plant keeps the moles from wreaking as much havoc on the beds, though they do love freshly dug soil and will often come up in the planting hole next to the tomato.  I have to wash the mounds back down and put lava rock in them, or metal plant tags next to the plant as a deterrent.

This year I'm experimenting with using determinate tomatoes, which are shorter, and eggplants and peppers, all from the poisonous nightshade family, as possible deterrents among my bush beans plants to see if they will protect the plants from voles.  So I have rows of beans running down between the nightshade plants, and will compare damage with previous years when I planted beans in rows with greens such as collards, kale, mustard, and turnips.  Bean deadline is May 15 to get them in the ground, though I have experimented with a few cold tolerant beans as early as April 15. 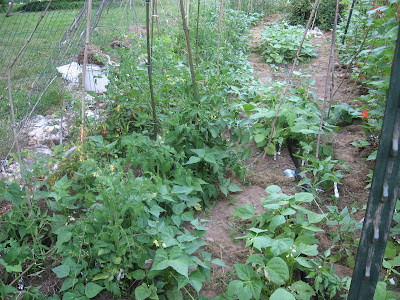 A problem is appearing with the middle bean rows, since some sold as bush beans, especially Marconi nano from Gourmet Seeds of Italy are developing runners.   The far end of the bed has a few tall indeterminate tomatoes that require more staking.   I may put them under plastic later in the season to try to avoid blight.  I have them fitted with soaker hoses and mulched with grass clippings to keep the weeds down and hold the water in better.  That is my current gardening chore, nearly finished with one long bean bed to go. 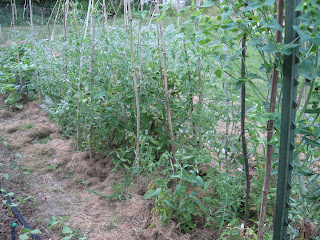 I planted mainly runner beans down the trellis on the sides of my 2 gardening beds again, they are better suited to cooler temperatures than regular beans and grow faster, bloom sooner, and bear beans sooner here.  They are not very good with hot summers, though.  The hummingbirds love the red flowers.  They require pollination unlike regular beans though and I didn't see a very high set of pods on the plants so far. 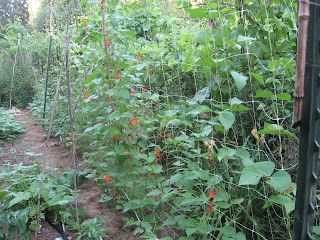 This is my other bed which has squash, cucumbers, beans, and cardoon, which can be seen in the foreground.  I've been getting quite a few cucumbers but the voles finally found them and hollowed out a couple, so the wars are on.  I am trying sprinkling some cayenne pepper around the plants and put some cukes up off the ground on some 1 gallon pots.  The cucumbers are tied up on trellises to keep them off the ground, though the plants have been setting fruit a lot near the ground.  I've gotten a couple of crookneck squash so far- heavenly!  If you haven't tasted a homegrown golden crookneck, you've missed one of life's great taste treats. There is a lot of self-sown borage in the bed which I tolerate since it really pulls the pollinators in, and that's very important for fruit set, except that I'm growing a lot of gynecious cucumbers and some that develop without being pollenized, parthenocarpic.  But, a major gardening goal is keeping those pollinators happy.  I have big beds of mints and lots of flowers in my once edibles-only garden to please the bees.  Many visiting my flowers are natives but there were a goodly number of honeybees on the borage today.  Squash and cucumber deadlines are seeding by May 1 to set out under tunnels by June 15 or earlier, whenever they are of sufficient size. 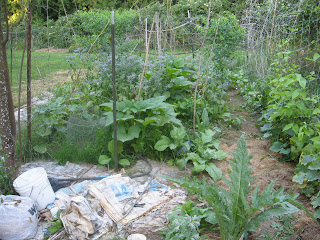 I also developed a new bed this year from some lawn that will have my overwintering greens in it.  We started out killing the grass with leaves last fall and with grass clippings this spring, then a lot of weeds moved in that had to be cleared out. 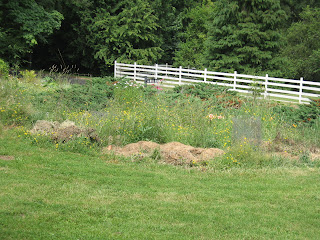 I cleared them out with a serrated knife one day, then used my mattock on the roots the next day, and seeded it after that, just making my deadline of July 15 for overwintering greens, necessary to give them sufficient size to withstand the cold.  I planted kale, turnips, collards, and mustard, maybe some Bok Choy if it came up.  Here it is on August 7 after 3 weeks of growth, I just got a fence put up of T-posts and wire fencing "cattle panels", hard to see in photo, but need to extend it upward with bamboo and wire to keep deer out- 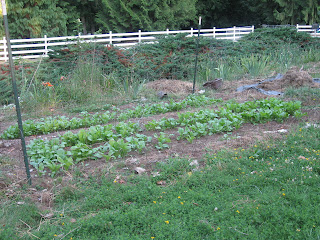 So, that was last deadline of the season.  I started getting ripe tomatoes on August 8, a week later than last year which was a month later than my usual start of the tomato season in a normal hotter year.  I may have to revert to growing shorter season and cold tolerant tomatoes- grrrr.  Here is winner of the first ripe tomato, Tricot Czech- 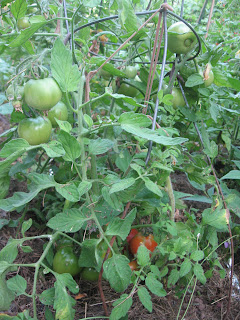 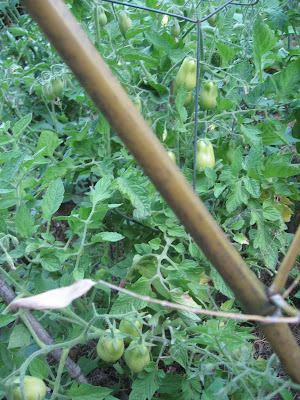 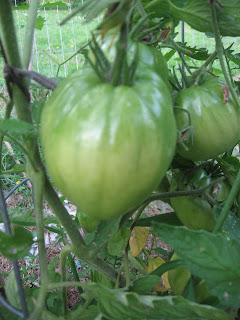 So, I hope you are enjoying summer and your vegetables,

Hannah
Posted by Hannah at 2:39 AM