Salad Burnet is one of those plant-it-and-forget-it types of plants that will thrive without attention and even seed itself around year after year.  The evergreen foliage in my zone has a mild cucumber taste, though the leaves may be a little tough later in the year and are best as just an accent in a salad.  Here is some Salad Burnet now, still lush and green on an elevated ramp where it gets very little water.  The flowers are just little green balls of seeds until they turn brown in late summer. 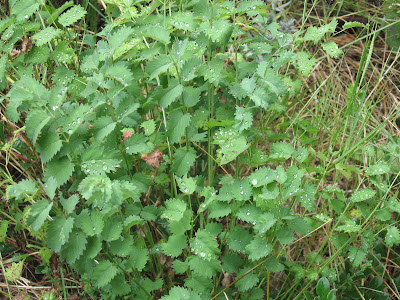 In the PNW Sanguisorba minor self-sows just moderately, but in my San Diego garden many years ago, it would self-sow most robustly, and make many very robust plants that were substantial clumps.  I found them very handy, as I lived on a canyon and a bird there, the Brown Towhee, liked to eat my bean, pea and corn seeds shortly after I sowed them, making a backward hopping motion to dig.  I would come out and find a neat little row of holes where my seeds had been.  So in order to get any plants up, I had a strategy that involved covering the rows with greenery so the bird could not see them or dig them up, and an additional covering of fence material like chicken wire to further prevent the bird from getting to the ground.  The Salad Burnet plants were reliably abundant and very useful for this, I would break up the clumps and strew them over the seed rows, then cover with wire.  The little seeds would be able to grow up through this, and then I could take them off as the birds just liked the seeds sprouting underground.

Here, there is a Rufus-Sided Towhee, prettier than the Brown Towhee and not having its preference for eating seeds, so we can live in peace, and I can plant my seeds without protection from birds, though I sprinkle cayenne pepper on them to help protect them from voles.  Slugs also take a toll on them as they sprout.

There are other Sanguisorbas that have a variety of flowers, written about in a good article-
Superb Sanguisorbas   Sanguisorba officinalis 'Tanna' has a petal-less flower head like a bobble head, in varying shades of magenta.  It is a great little plant, bred to be a miniature version.  It has bloomed several years, a deep wine red, here on July 23.  The flash wiped out the color.:-( 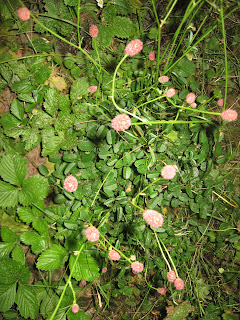 The seedheads still look reddish and the seeds were dry so I picked them today to save some seed.
Regular  Sanguisorba officinalis has been growing for a couple of years on my inferno strip in front, an area overcome with weedy annual grasses.  I started it from seed and it just bloomed for the first time, the bloom stalks reaching up to almost 4' tall (This is the color the Tanna should be)- 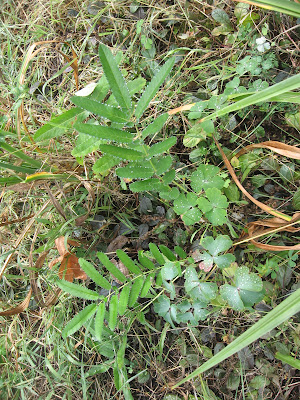 Sanguisorba is useful mixed in with other taller plants in a prairie setting, and also useful as a medicinal herb with many traditional uses, its name meaning to staunch or absorb blood.

I will be looking for other plants in this genera to add to my garden.  Some that sound interesting in the above article have a white or pink fuzzy head like a caterpillar in appearance.

Hannah
Posted by Hannah at 3:17 PM