A New Garden for a Barberry

I was looking for a place to plant my latest acquisition, Berberis darwinii, a Barberry with an edible berry.   It is a wonderful evergreen shrub, not quite as hardy as I would like but hopefully enough.
fruit photo.
It is deer-proof  because of spiny leaves and sharp thorns, so can be used for a barrier or used without fencing.  It does get quite large, around 10' tall and wide, but can be sheared.  It should be covered with flowers in spring.  flowers photo.

Its leaves below are smaller and glossier than those of the native Mahonias, Oregon Holly Grape, also in the Barberry family. 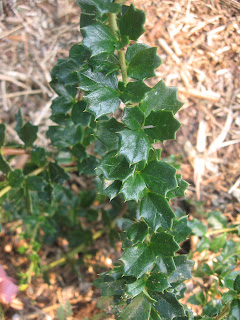 I decided on a neglected east-facing area near our woodshed, growing grass, blackberry vines, and other weeds, in the partial shade of a large Big-leaf Maple- 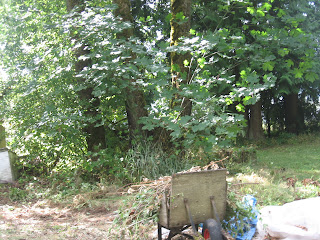 After clearing the ground with my mattock, I found it had a dip that I had to fill up with some with soil from around the yard, and molehills, which are easy when the ground is dry like a rock as at present.  Here is the area with the barberry planted and mulched with chips from blackberry vines, cedar boughs, maple boughs, etc.- we've been doing a lot of trimming and chipping to get ready for fall mulching.   The black edging will be installed when the ground softens up from some rain eventually, and a grass border will be left on the driveway edge for stray cars and lawnmowers.  I hope it will grow well there. 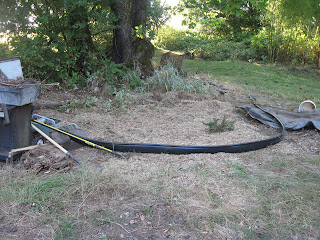 I also have some Berberis fendleri seedlings from a previous post, that may get planted behind the woodshed this fall or wait until next spring.  They also have an edible but smaller berry, reputed by High Country Gardens to taste like sour cherries.  It is native to New Mexico and much hardier.

I am presently busy harvesting fruit from wild berries like blackberries, Oregon Holly Grape (Mahonia nervosa), and Salal, which taste good mixed together and also with Illinois Everbearing Mulberries and Aronia berries.  I like to make either gelatin (unflavored beef gelatin or vegetarian from seaweed) with Stevia for a sweetener, or a thickened fruit sauce with Guar Gum as a thickener and Stevia for a sweetener.  I'm also getting early fruit from William's Pride Apple, clockwise Harrow Delight Pear, Desert King Fig, and Ubileen pear, mostly from Raintree Nursery.  Rescue Pear will be coming up, aromatic fruit so large you need to be rescued if it falls on your head!  And also Greensleeves  Apple, early, mostly bug-free, and aromatic. 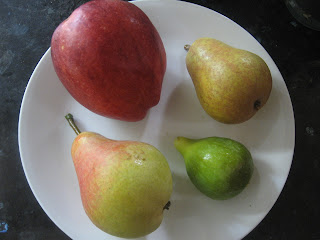 Hannah
Posted by Hannah at 4:27 PM