Now that the bean growing season is over, I have trays of bean seeds drying and am assessing the varieties I grew and oogling online seed sources for something new to plant next year.   The Pacific Northwest has a cool climate in summer rather like that of Great Britain, so runner beans, Phaseolus coccineus, which are about the only beans that do well there, also excel here.   Insuk's Wang Kong scarlett runner beans have been my best producers.   I've also tried a couple of varieties of other red-flowered, purple to black seeded runner beans that can get longer and stay tender longer but were not as vigorous or productive.  Here is a former post about beans I grow.  IWK can actually throw a few white-seeded plants, I guess recessive genes.  I found a few this year in my harvest.   Because another distinction of runner beans is that they need cross-pollination to set seed, they also are harder to keep from crossing so it is better to grow only one variety at a time, though I am going to compromise by growing only white-seeded varieties next year if feasible.

Discussions on the GardenWeb legume forum have interested me in growing runner beans next year that have white seed and white blooms, in search of more delicate texture and marvelous nutty flavors.    I hope the hummingbirds are not too disappointed.   They love the red flowers.   White-flowered/seeded varieties are difficult to find from seed companies or else expensive, so I am attempting to circumvent these problems by growing seeds sold for cooking.   I bought 3 kinds of white runner beans and a fourth bean for cooking described as having a nutty taste, and just did an experiment trying to sprout the beans.  The source was Purcell Mountain Farms, who state that their beans will sprout.  The 3 white beans are, starting lower left and going clockwise, Corona (AKA Bianco di  Spagna), which sprouted well; Runner Cannellini, which did not sprout, turned a little brown, and smell bad; and Sweet Runner Cannellini, which developed several kinds of mold before finally sprouting a couple of beans; and the lower right is the beautiful brown mottled bean Spanish Tolosna, which is a chef's favorite for nutty flavor, and  sprouted 100% a couple of days before any of the runner beans. 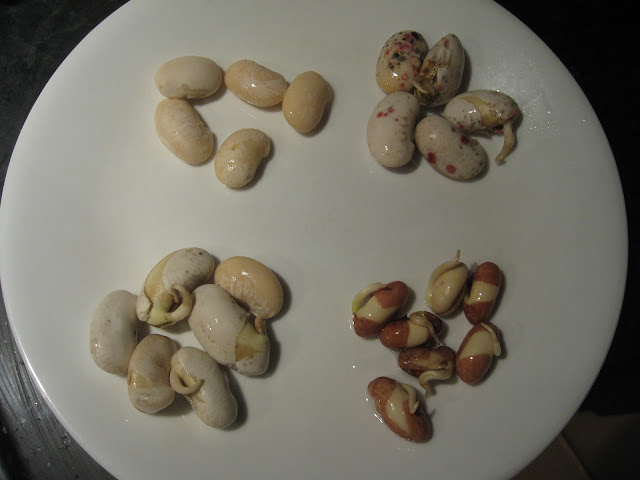 I decided to try the sprouted beans in my aquaponics system, which currently just has basil plants.  If they succeed there I will post a photo.

So I am still perusing heirloom beans on various websites and will be trying some new beans for next year, which is very optimistic since rabbits decided my little bean plants were their favorite food last year.  I did find that putting netting over the seedlings kept the rabbits away.  I've decided I like the beans that have edible pods more than the shelly type of bean which develope tough pods which are not edible and must be shelled to eat just the bean.  Appalachian heirloom beans are supposed to be strong in the characteristic of the pod staying non-fibrous to a large size and even until the pods start to dry up, so they are my focus.