Even Thorns Can Have Serendipity

Today I took on the unpleasant task of removing some diseased roses.  I have 5 climbing roses on a deck.  Last year I had to cut a lot of dead wood out of Reve d'Or from some unknown disease, and this year he was all dead except for one twiggy cane from last year. 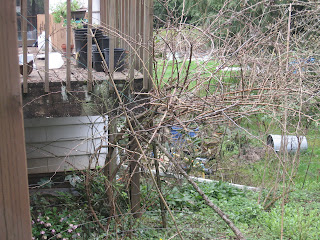 He had been vigorous and a good bloomer of peachy blossoms, this is 2008, so it was sad. 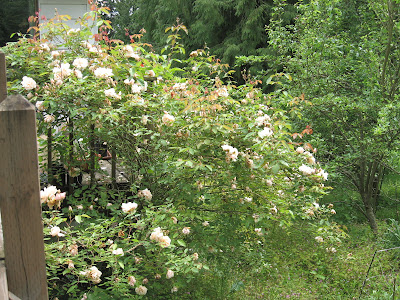 But he was very thorny, and was always catching my clothing or hat when I went by.  I have a painful knuckle where he got me today with a thorn through my glove.  But I was very surprised to find on the thick base of the plant a nice clump of Turkey Tail bracket fungi, which makes a nice medicinal tea. 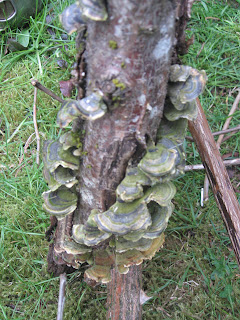 So I broke them off and need to trim them up, then I can actually try making the tea!

Next rose over is my favorite, Zepherine Drouhin, who has the distinction of being first and last rose to bloom in my garden as well as keeping a few blooms all season of a lovely hot pink.  This is the first flush in 2008.  She shows little sign of the disease. 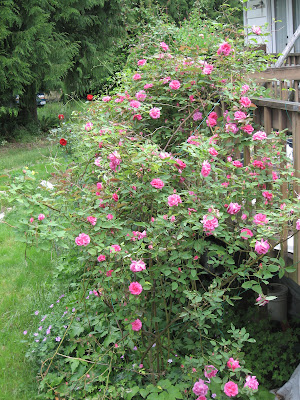 Peeping out on the left is the magnificent red, Dublin Bay.  He is younger a few years and a slower grower.  His blooms are a fantastic red and very long-lasting on the bush.  He shows almost no signs of the mysterious disease.  He was finally achieving the height of the deck in 2008, which gives him better sunlight. 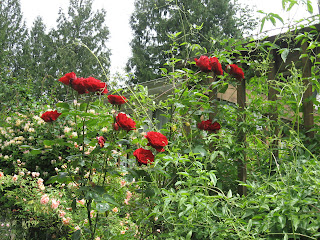 Next rose down the line is similar to Reve d'Or in color but a deeper peach, Crepuscule.  She was very beautiful in full bloom (2008) but also very susceptible with only one new little cane untouched. 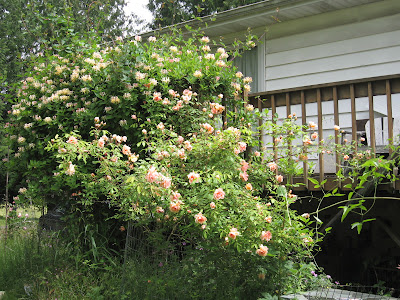 She has very lovely coloration, deeper in the center. 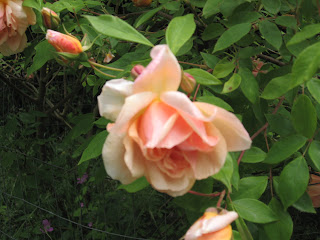 On the far side of the overbearing Hall's Honeysuckle and therefore in too much shade is a rose that was supposed to get very large but has not yet, same age as Dublin Bay, Awakening, with a smaller light pink bloom.   Someday when she makes it to the top of the deck perhaps the additional light will spur her on.

But a newer addition to the garden, a NO ID once-blooming white rose, has been vigorous growing on one of my deer fences, and was knocked over last year when my husband was taking out a hornet's nest, necessary in spite of hornets being valuable in the garden for eating pest insects, because it was too close to foot traffic and hornets were aggressive and stung 3 people.    Perhaps it will fill in where the other roses are missing.  Once-bloomers do have a vigor of bloom that compensates a lot for not reblooming.  I freed a couple of heavy T-posts when I removed the Wisteria and Silverberry that I used to strengthen the fence and hold up the rose, so it should put on quite a show again this year, thanks Carol O. 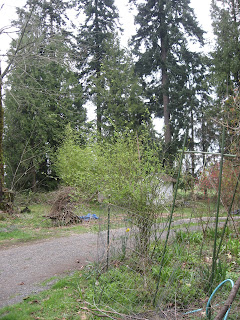 Present also by the deer fence are the short climber Fourth of July, with fireworks-like splashes of red and white, Austin roses Evelyn and Heritage, fragrant pinks, and the large and magnificent Apricot Nectar.  Hopefully they will not be affected. It is good to see new growth, and new hope springing forth.

Hannah
Posted by Hannah at 2:08 AM