We are plunging back into duck-keeping.  Four little downy ducklings are attempting to turn a box lined with newspaper into a pond. 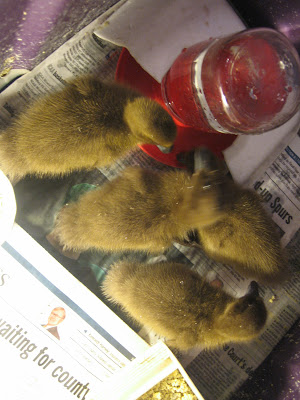 Previously we raised some Golden 300 ducklings, hybrids named for supposedly laying up to 300 eggs a year.  They were not being carried by the local feed stores this year so we settled for some unknown Khaki Campbell ducks, which seem to have almost as good a laying reputation on the internet.  They must be closer to wild duck stock as well since I've never seen the rowdy pond building activity in the Golden 300's.  It's strange how people get a weird notion of eating duck eggs, even a farmer I knew couldn't seem to stomach the idea.  Imagine the best chicken egg you've ever eaten, cracked into a fine china bowl.  Then imagine the slightly yellow-tinged whites, runny around the edges, become crystal-clear and firmer, and the magnificent deep gold yoke taking on a succulent glory hitherto unknown.  There you have a duck egg.   But ducks are not as good at ripping the moss out of a lawn, or taking grass down to bare ground to turn a lawn into a garden.  They are also not as good at using up left-overs and food scraps.  Moss removal, fertilizer added- 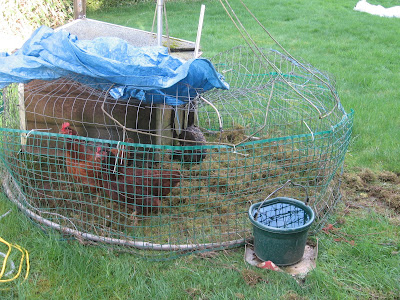 OTOH, ducks are tougher birds, and require less shelter in winter.   Most of the time they don't even go into the house at night but stay out seemingly awake all night.  Silly chickens head for the house at dusk and can be seen totally stretched out at night inside.  This comes in handy if a chicken should escape from the run during the day, as generally they will be desperate to roost come nightfall.  But we had one set of chickens that was extremely unruly, Silver-laced Wyandottes, which are a rather heavy dual-purpose black and white barred chicken, though I had seen some cute bantam birds at a fair with the same name (?).   The Wyandottes all escaped and RAN for the barbed wire fence of the neighboring pasture or the woods when chased.  Not only that, they did not return to roost, for several days.  I finally had to get up in the dark and go out and surprise them at rest in order to recapture them.  The more docile Rhode Island Reds above will allow me to come up to them in the garden and pick them up.  Nice girls.  Good layers of brown eggs.  I can put them out in a fenced bed that needs some cleaning up and let them wander around, without worry, and pick them back up to put them back in the chicken tractor later.   But I would give RIR's first prize for complaining, the cup always seems to be half full for them.    I do a mean complaining hen imitation.

Ducks are a lot of fun when given a chance to swim in a wading pool too.  They are insanely happy when they hit the water and dunk and splash and groom their feathers with great zeal.  They do not have to have lots of water all the time, though, as long as they have a bucket deep enough to submerge their heads and wash their eyes.  But they do know how to enjoy themselves.  Even the little ducklings are blissfully submerging whatever parts of them they can when given some fresh water.  And who can resist this- 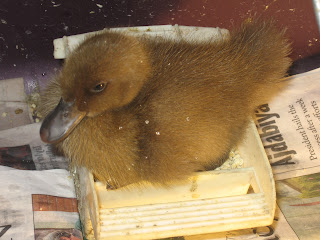 Happy spring, if it can ever decide to actually warm up around here.

Hannah
Posted by Hannah at 7:15 PM