Chopping off the Gorgon's Head

This is the Gorgon, a Wisteria that had been a deck-eater and was moved to a place in the lawn.  She would not refrain from trying to take over the yard so I finally decided to permanently remove her, or as permanently as it is possible to remove a really rampant vine.  She did flower but only briefly in the spring, which was not worth having to cut her back every fall.  If you want to see what one can grow into, visit the Bishop's Close garden in Portland, OR to see a very large Wisteria forming an outdoor room on a very large iron trellis. 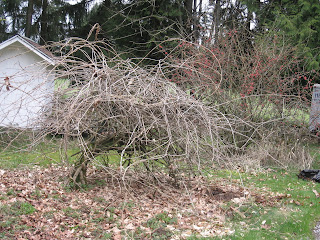 First I used a lopper on all the branches, leaving a twisted trunk system. 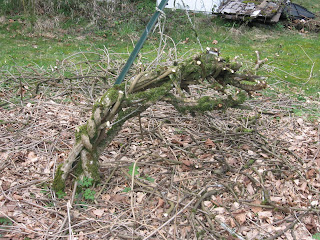 I then tried one of my favorite tools, a folding saw, which has been invaluable in pruning off 2-3" branches high in apple trees.  It is hard to do branches close to ground and twisted around, so I then resorted to a racheting lopper and then an axe, and finally got it cut off but left some stumps that will need further work in order to be able to mow the area again.  We will regain car access to that part of the lawn, which makes a loop around our pump house and storage building.  Here are my tools- 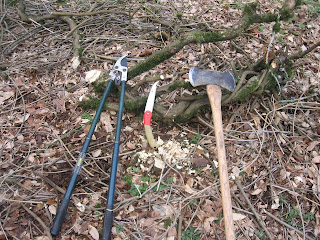 The next step will be to run the branches through our chipper- free mulch!  Mowing will take care of all the little Wisteria vines that will be popping up in the future.

Today I also managed to get the clean-up started on my front door blog photo-feature bed.  First I removed some dead branches and twigs from the weeping cutleaf Japanese Maple.   I pruned the dead growth off the tree peonies.   I removed some dead geranium growth from last year.  Then I cut off the Miscanthus grass clumps with my folding saw.  It has an advantage over a lopper or pruner since I can grab a whole clump and start sawing away, and don't have to do multiple cuts to reach each grass stalk.  Usually this should be done in February but it was difficult since it was so cold and wet, but I didn't see much in the way of new growth yet anyway.   This bed was supposed to be a variegated bed.  The grass is also known as Zebra grass since it has stripes across the blades.  Variegated Hebe speciosa variegata proved too tender for here and was lost; a shame since it was a beautiful plant.  A variegated Wallflower also did not last.  Lonicera nitida Lemon Beauty is still there.  The wonderful species Tulipa praestans unicum makes a dependable appearance now with variegated leaves and gorgeous red flowers.  Vinca major 'Variegata' is nicely variegated but can be quite the garden thug.  I have to balance that off with its ability to overcome weeds.  I prefer the Vinca minor 'Illumination' which stays very low to the ground, and is very lovely in bloom, pictured in my July 31, 2010 post, along with Tulipa praestans unicum. 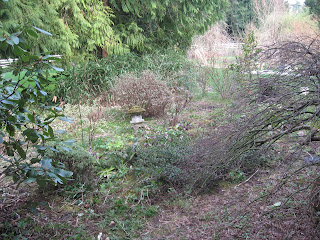 The large brownish clump behind the moss-covered tea house is my variegated Daphne x transatlantica 'Summer Ice', which has a narrow cream edge around the leaves.   That clump had the leaves go brown in winter but a smaller bush (shown below) by the front porch stayed green.  Both have lots of little buds coming on, and keep on blooming during the summer unlike D. odora. 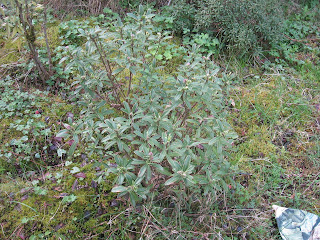 Another Daphne with purple flowers which makes a very neat small mound is D. 'Lawrence Crocker'. 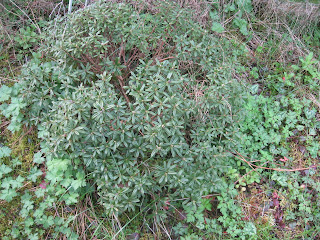 Daphnes have been one of my favorite genuses to collect, though only 4 of 8 are still alive, #4 being D. tangutica, a nice larger clump with pink/white flowers.

Favorite perennial to collect is probably Pulmonaria, which are now coming into their full glory.  In addition to having a wide range of flower colors, leaf shapes, and silvery spots and patterns, they have the ability to self-sow, and hybridize to yield all sorts of new adorable seedlings.  Cute, huh? 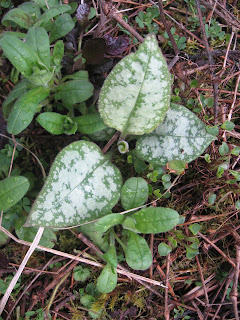 And out of 14 varieties, I've only lost one to some kind of root rot- Margery Fish.  They like cool shade best, and can positively languish in a hot dry location. 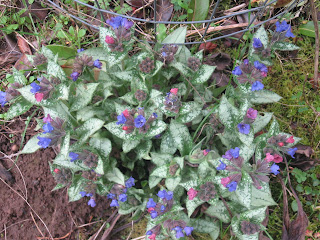 The ultimate in silvery durable charm.  More photos of Pulmonarias can be seen in my May 15, 2010 post on the Borage family.

Hannah
Posted by Hannah at 1:22 AM