I hope you still have something to harvest in your vegetable garden.  It's always hard for me seeing the end of the growing season.  I'm finally getting enough tomatoes after the long cold spring and early summer to cook down for sauce in my crockpot.   Here is part of one day's harvest.  Starting at the top, long skinny paste San Remo.  The fluted one clock-wise is labeled Azure Paste from Tanager Song Farms, I don't know if it is the correct tomato.  Then Rostova, a heart, 4 Martino's Roma, and continuing on the outside and under San Remos is the impressive New Big Dwarf, large pink tomatoes for a short determinate plant, with rugose leaves.  In the center is another TSF tomato, Novinka Kubani.  All these tomatoes are blemish-free.  Mountain Princess and Shilling's Giant Heart had the most cracking this year. 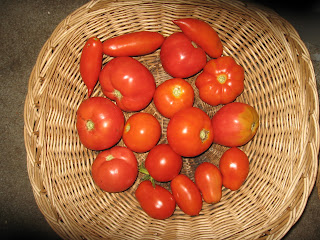 The fall rains started later this year so it may be a while before late blight may strike.  I did get a partial cover over my tomatoes this year, though not like my tomato house last year, which had wire fencing in the roof to prevent sagging plastic sheeting.   I'm also searching for drying pods among the bean plants for my seed-saving.   My runner beans are getting dry, so I have been shelling lots of them.  Last year I had solid black, violet with black specks, and violet with lots of black, but this year I had one plant with white flowers instead of red, and white seeds as well.  Magical beans.  These are Insuk's Wang Kong beans from a trade.  Insuk is a Korean lady gardener who introduced the runner beans here from Korea, I don't remember the exact story. 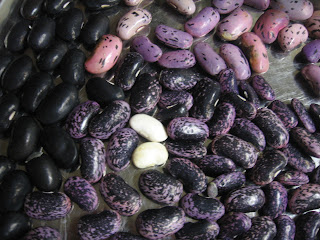 The turnips and other greens are going strong and will continue after frost and especially in late winter/early spring when they start growing again to go to seed, providing lots of greens when nothing else is available, and small clusters of flower buds like miniature broccoli.  This is a cylindrical turnip from Gourmet Seeds of  Italy, it weighed in at about a pound. 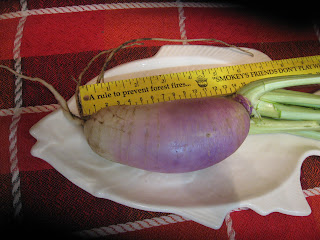 I cook the greens as well, they were favorites of mine along with other greens as a child. 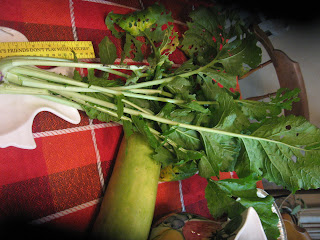 The squash and cucumbers have their usual late season mildew and have slowed down in bearing from the cold temperatures.  But one variety of cucumber, Tanja, which I neglected to pick, has attained a mature size here with a 12"/30.5 cm ruler.  I peeled one, sliced and removed the seeds, and stir-fried it with mushrooms, onions, garlic, ginger, and Bragg's Liquid Aminos.  They can also be stuffed and roasted, or made into a cream soup with cream or coconut milk, which also works very well with pumpkin. 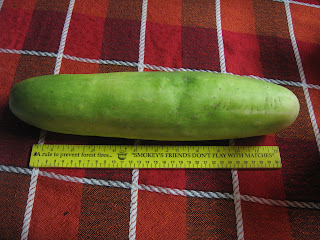 Here is something I'm trying for the first time, Cardoon, a thistle. 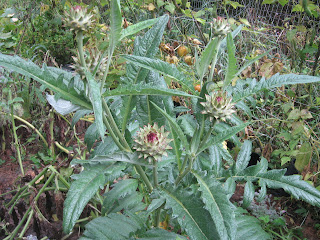 One plant out of the 4 that I got planted in the ground grew large and is flowering, very prickly flowers.   I am supposed to wrap the stems to blanch them but have been too busy.  It is a very interesting thistle.  The stems are supposed to taste like artichoke hearts.

Well, if you have no vegetables to harvest at this point, you can still take advantage of the abundance of pumpkins to make the above mentioned soup, and spice it up with some Turmeric, Curry Powder, Ginger, or Cinnamon.

Hannah
Posted by Hannah at 3:00 AM