I've been out searching for drying bean pods and still edible pods among the bean vines.  Here are some picked today.  The cute curved pods are the Yellow Shrimp Bean, purple streaked at maturity, Anellino Gialo from Gourmet Seeds of Italy.  The purple ones are thin Velour beans from Park Seed.  The green ones are the second sowing of Marconi Nano, a bush Marconi from GS.  Then the dry pods are runner beans, mostly Insuk's Wang Kong. 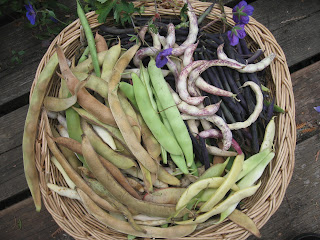 Anellino Gialo is a cute bean,  productive and tasty.  There are other colors of shrimp beans, green and a green with magenta streaks that look alot like my Uncle Steve heirloom pole beans.  A closer view 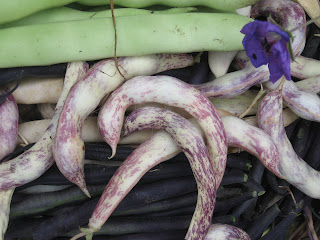 Here are some Uncle Steve's pole beans I picked today. 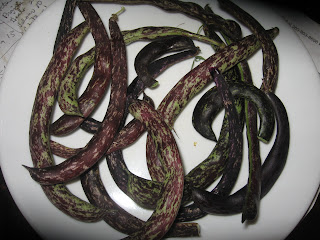 Here are some of my shelled bean seeds, all broad flat Romano types.   The brown ones are an heirloom bush bean, Yer Fasulyasi, from the Abundant Life Seed Foundation, which used to have a very wide range of heirloom vegetables and beans before they had a fire a few years ago.  The black ones are Marconi nano.    Another similar bean is Capitano, a yellow Romano bush bean from Park Seeds with white seeds.  All of these beans are very tasty and meaty, and seem to be staying tender into the larger stages with fully developed seeds. 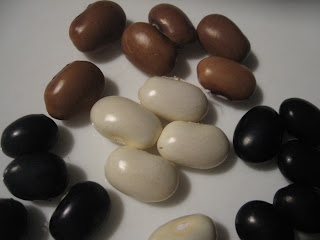 Some pole beans appeared among my Marconi nano beans, a nice error, tasty and a good grower, with green pods with a purple blush.  They resemble 'Peck to a Hill' pole beans on the Heritage Harvest Seed website.  They have attractive black seeds with white mottling (below this photo).  I will grow more next year. 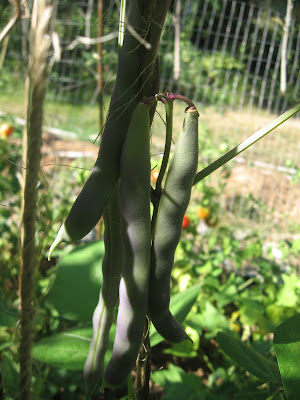 Another ALF heirloom, Pisarecka Zlutoluske, is an early yellow wax bean that seems very cold tolerant, I have planted it out on April 15 before, one month before my usual bean planting date, and had good crops of tender yellow beans with rosy seeds flecked with white spots. 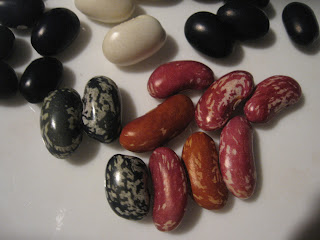 I also have good yields of beans and seeds from Speedy (Gourmet Seeds, below), which was as fast as Pisarecka Zlutoluske, and the red-podded Velour (Park Seeds), which though small were slow to develope, both bush beans of the thin pencil shape, tender, delicate and delicious. 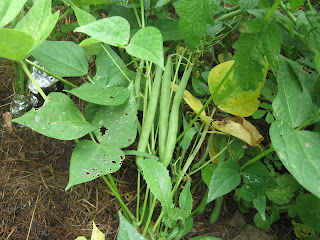 Velour beans are quite thin but tender, here are the very messy mature dry pods that had flopped in the dirt.  It was good I picked them since it rained later. 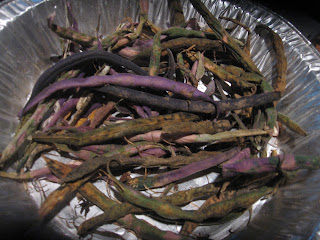 Since they were mostly dry I got them shelled, but they are difficult because the thin pods really stick onto the beans and don't want to split.  The Romanos by contrast have a pod wider than the beans and are easy to open.  But the Velour beans, below, did clean up nicely.  They are small, and become very hard small seeds when they dry so not good for shellies. 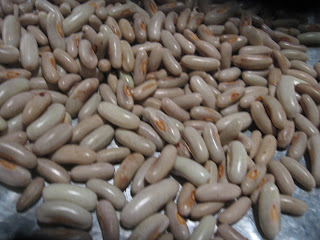 The runner beans, Insuk's Wang Kong, are beginning to dry out for picking pods for seeds.  I will probably eat some of them as shellies.  Here are the huge seeds from one pod taken with the other beans for comparison. 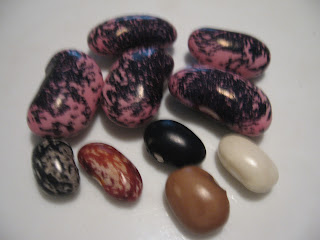 Have fun shelling those beans,  and find some good heirlooms to pass along.

Hannah
Posted by Hannah at 2:59 PM