I'm working intensively at present on reducing the amount of out-of-control blackberries on my two acres. These consist mostly of Himalayan blackberries, Rubus armeniacus, brought over from Europe in 1885 by Luther Burbank.  These can get canes 20-30 feet long and grow up into trees, sometimes bending over the young and susceptible ones like an oak I planted at the edge of my woods, hard to see but at around a 30* angle from the big alder, bending out over the ladder.  Note the brown area where blackberries and stinging nettle have already been cut back, which will be mowed next year to maintain the space.  I will cut back the rest to our property line after the berries are done.  I have to get up on the ladder to pick them, and the ladder also gives perspective. 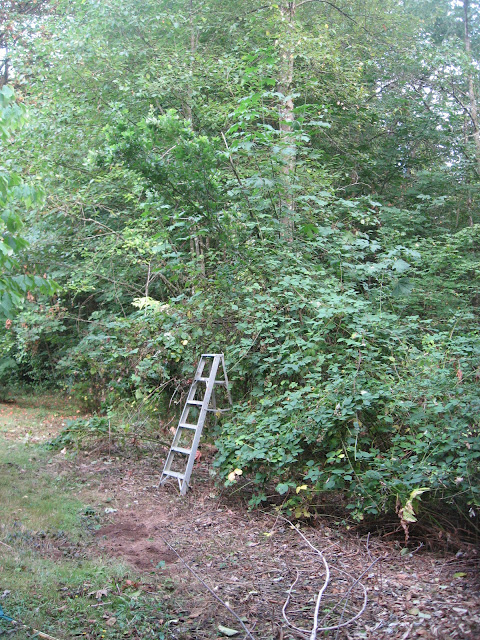 It is especially important to try to control the canes at this time of year because the fall rains are beginning in the Pacific Northwest (PNW) and the canes are starting to tip-root, the growing end in contact with the soil will dig in and form roots, thus multiplying and spreading the number of plants.  The other invasive blackberry, the native Rubus ursinus, AKA Vegetable Barbed Wire, also tip roots.  It is a smaller vine but very invasive, and can festoon smaller trees and shrubs and cover the ground.  It is not very productive of fruit, unlike the Himalayan blackberry, from which I have picked almost a quart of berries a day this year for a couple of months.   I make a gelatin dessert from it with unflavored beef gelatin or vegetarian (seaweed) gelatin, Stevia and a little honey for sweetening, and additions of other available berries, like the wild Oregon Holly Grapes, Thimbleberries and  Salal, or Aronia berries, or Mulberries.   For a sauce I also like to thicken it occasionally with Guar Gum, which must be added to cold water and stirred well to prevent lumping.  I get it from Azure Standard, a co-op on the west coast that has truck routes and drop points, but also ships UPS.

Best control of blackberries has been mowing, so I am presently involved in reducing areas in my yard that have been too overgrown to mow, or had barriers.  Sometimes this just involves cutting down a lot of blackberries, but in some areas I have to remove logs on the ground that have kept us from mowing in the past.  One log was harboring  a nest of termites!   Our previous owners logged the property and piled up a lot of big logs behind our shop. Many of these have been in place so long they are falling apart.  There are also brush piles which I considered wildlife refuges, so I am having to remove some of them. 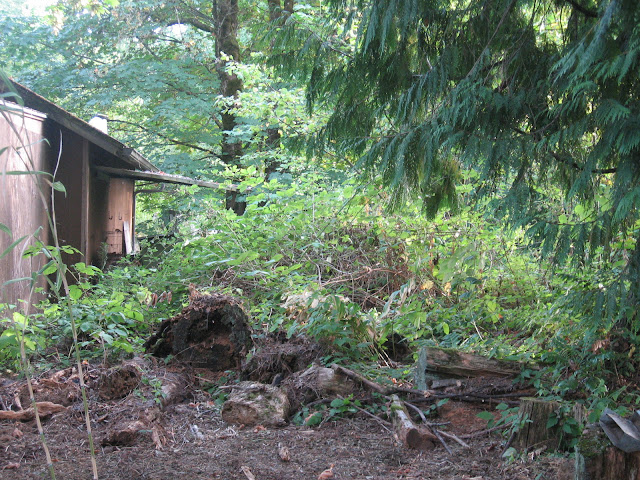 This area has been overrun with blackberries ever since we moved in, and still cannot be mowed, though the logs are starting to break down enough to crumble.  I picked up one small crumbly log and found a cute little nest of a salamander mother and her tiny puplets.  I hope she doesn't abandon them after being disturbed, though I am unable to find if she is actually caring for them at this point.  Here is the same area after several days cutting out vines and stacking them for chipping.  I left some wild roses and a few thimbleberries, and a native flowering currant.  I have a Trazel planted there as well, a hybrid Hazelnut.  But a couple of others self-sown trees will go.  The bamboo, shown in a previous post,  looks much nicer all weeded as well. 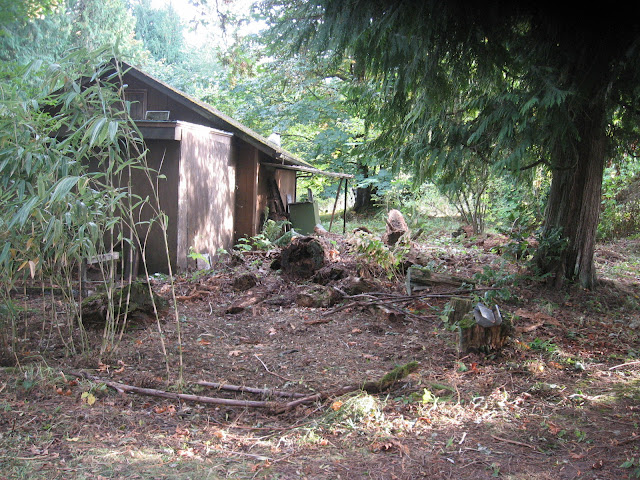 I am hoping to plant some shrubs with edible fruits there this fall or next spring, to provide some shade cover to discourage the blackberry vines.   Although I have been an organic gardener, I am using a very small amount of brush killer, Triclopyr, by applying it to the fresh cut surface of the canes with a bottle with small tubular applicator.  It does seem to help prevent regrowth of the cane.

Then there are areas where blackberry vines have crept in around the bases of rows of trees.  I hope to remove the vines and cut off lower limbs or remove dead trees as here, so I can mow in closer and reduce hand weeding and cutting. 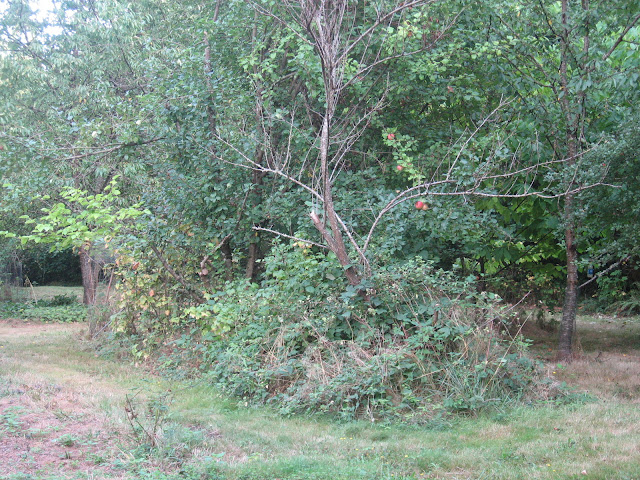 Well, it's raining so I may have to postpone getting this one done, so I am going to post anyway.  Happy Fall!  BTW my MIL whom we cargive was 100 years old yesterday!

Hannah
Posted by Hannah at 3:05 PM